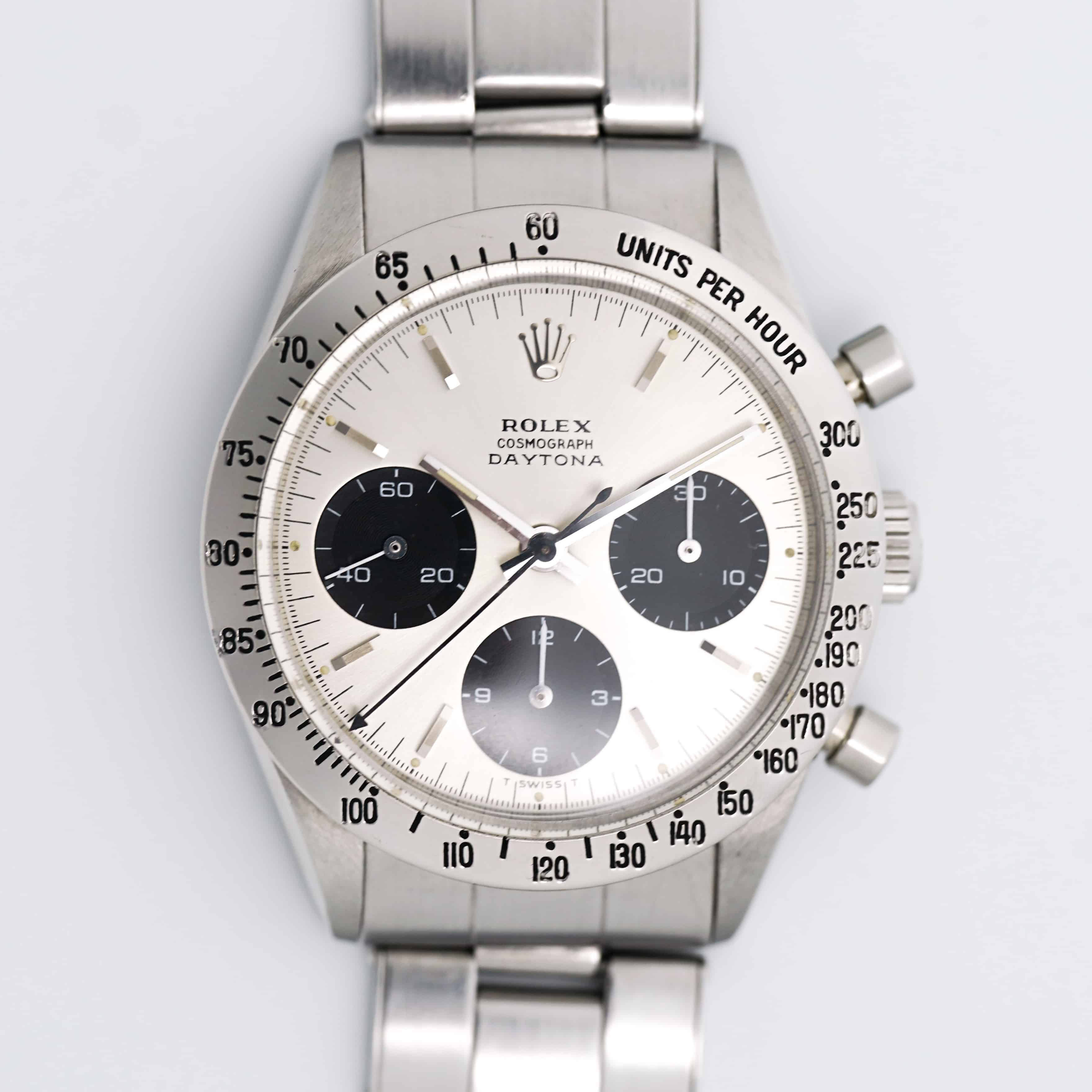 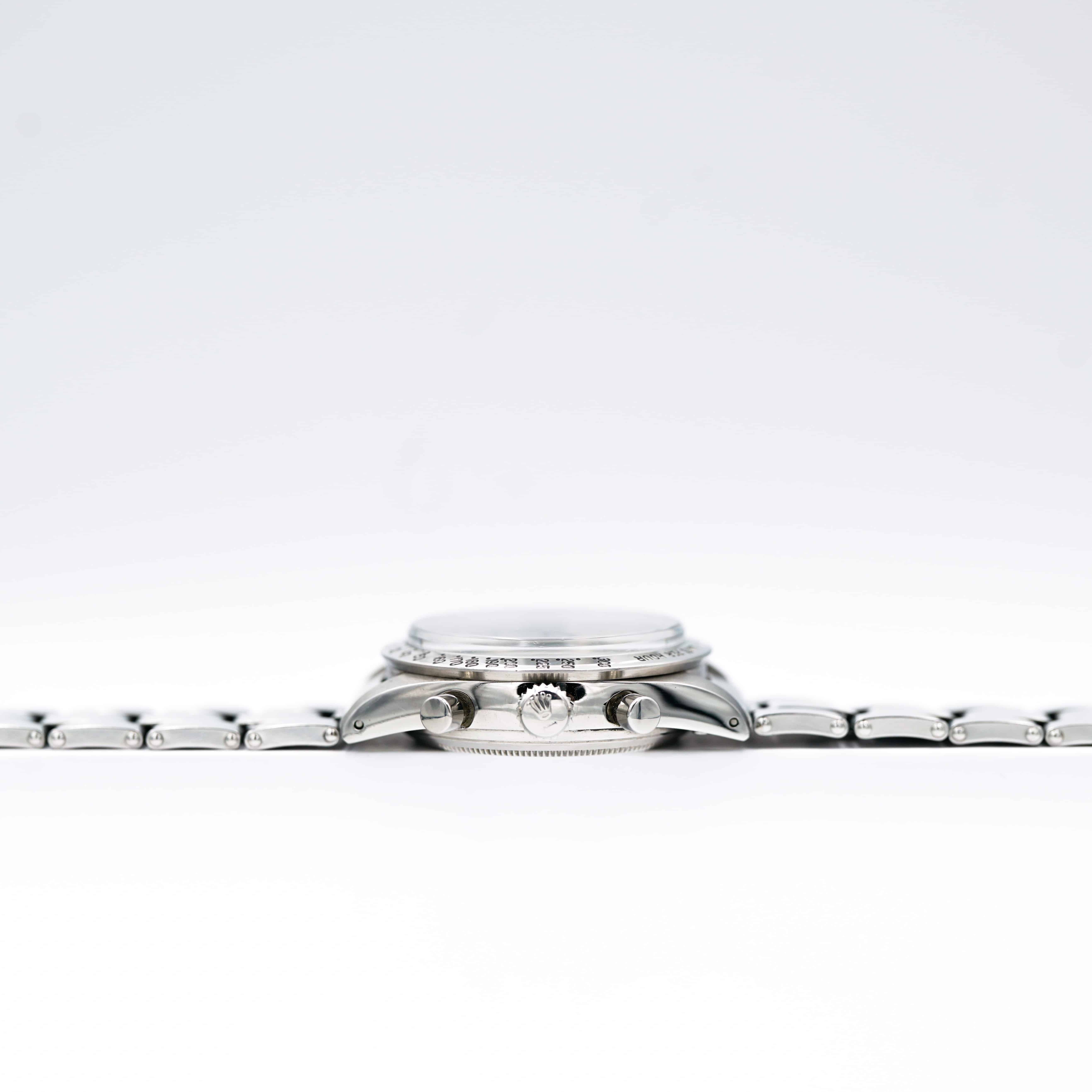 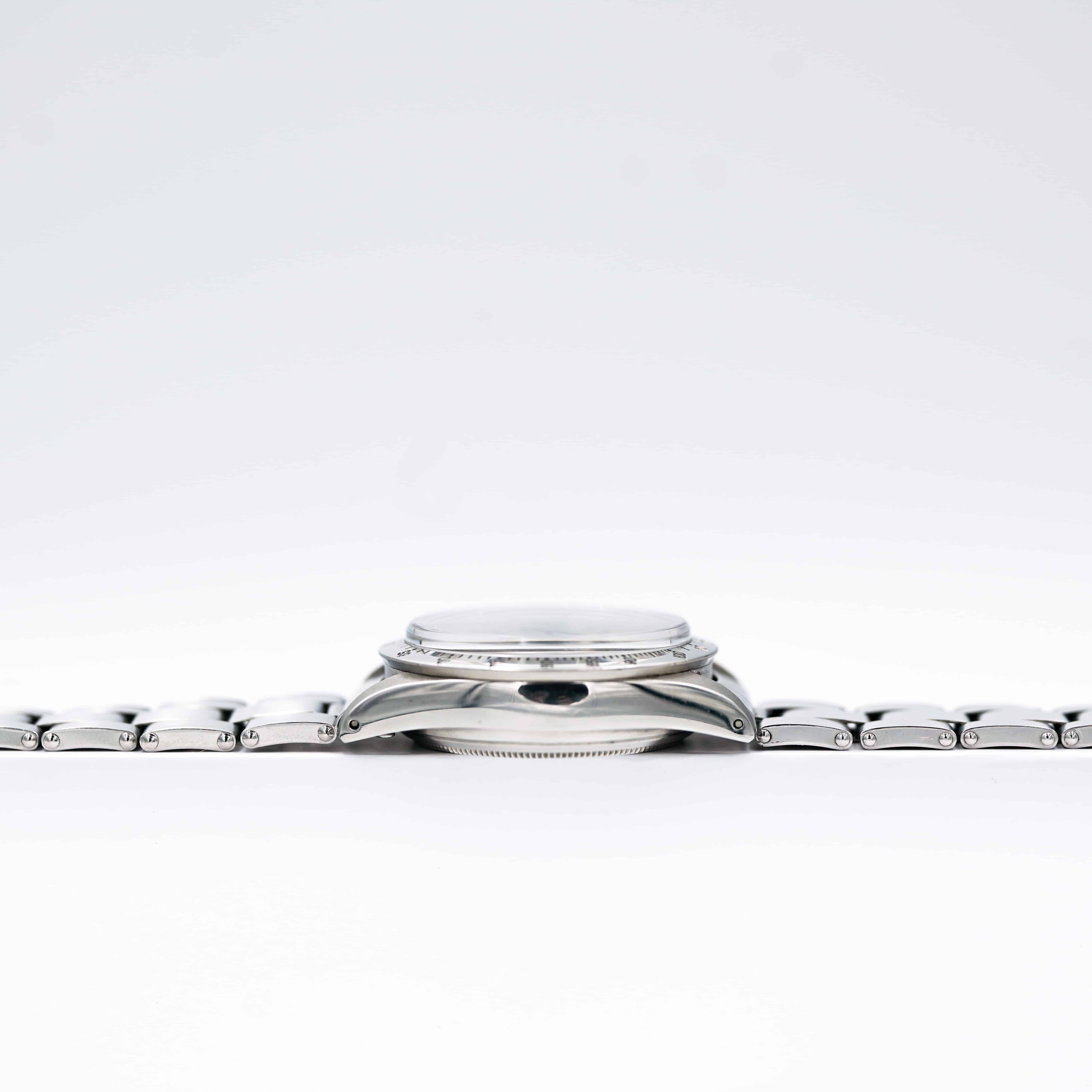 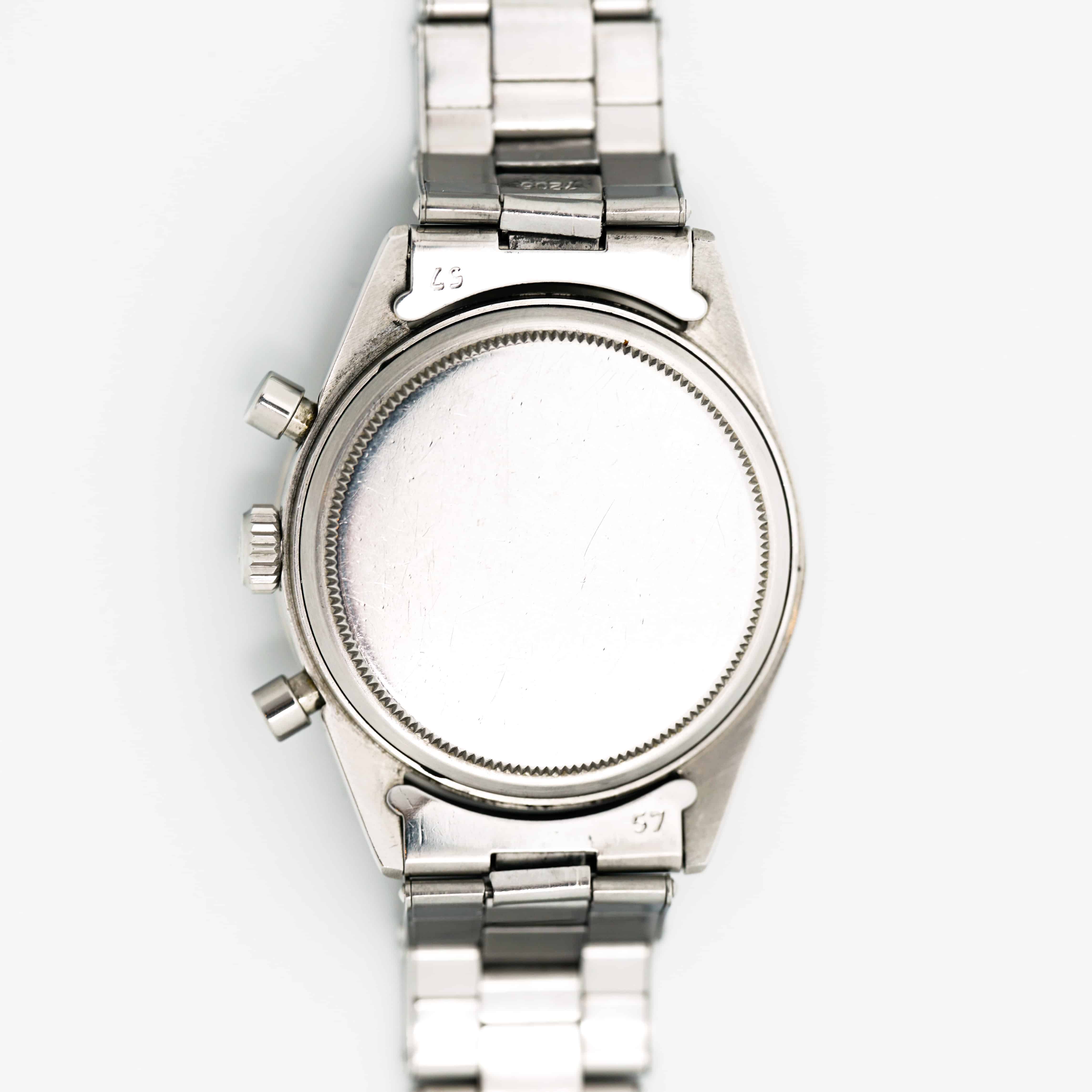 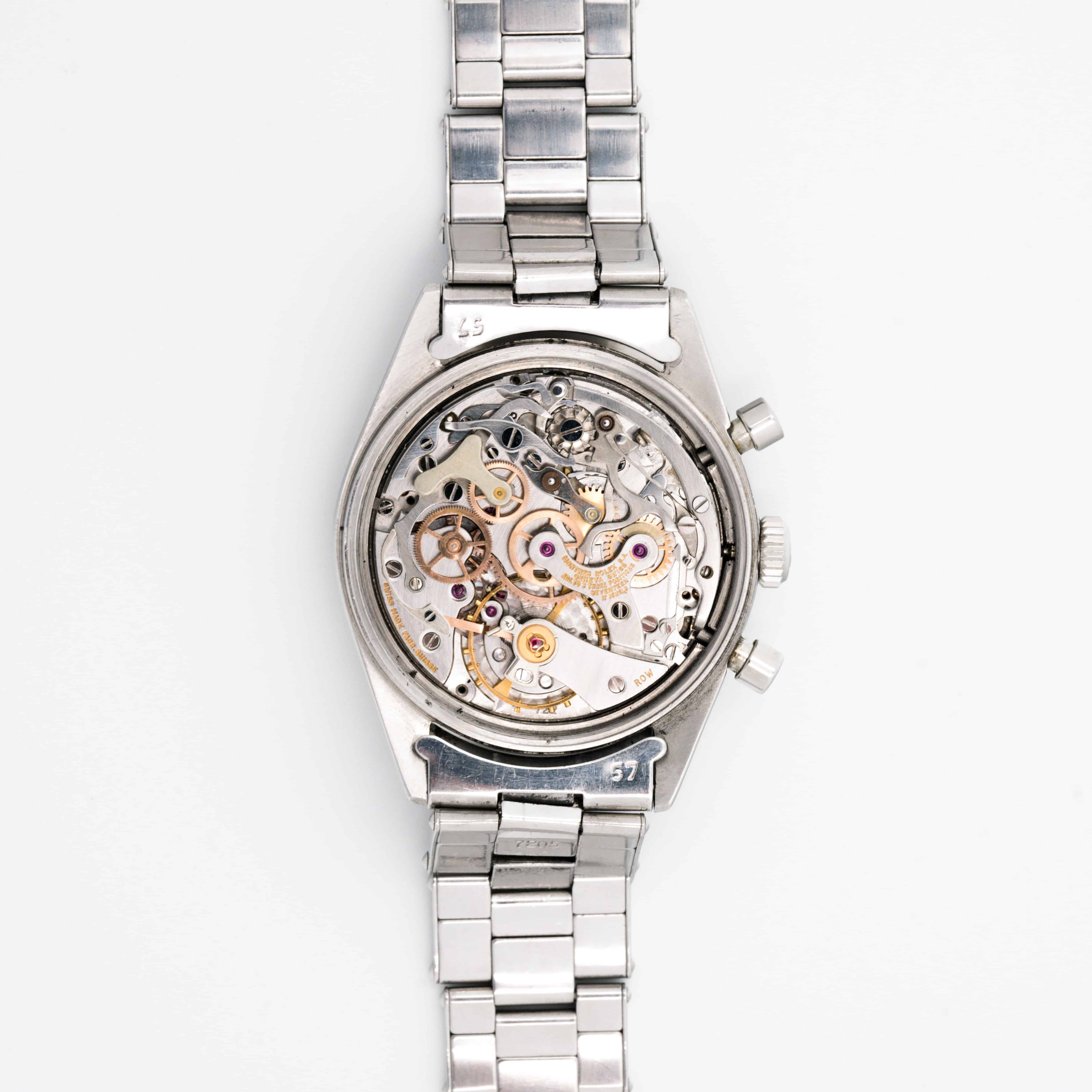 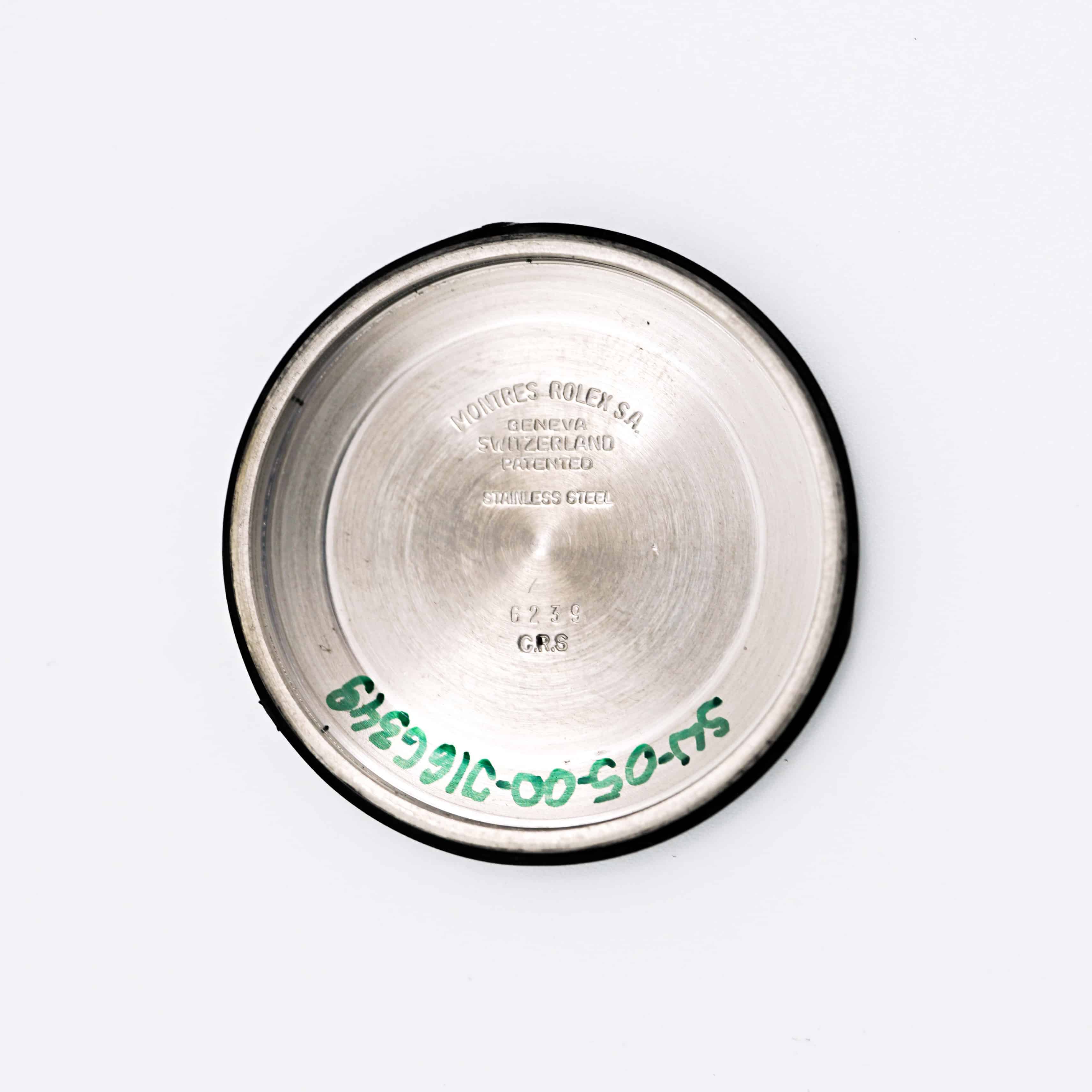 This vintage Rolex “Big” Daytona ref. 6239 is a fantastic and early example of a wildly iconic tool watch. While the ref. 6239 is known for its steel bezel and plump pushers, this particular example bears its original early and rare ‘300’ bezel along with the “Big” Daytona logo. The sharp stainless steel case, plump pushers and contrasting ‘panda’ dial result in a significant wrist presence while remaining understated and elegant. Despite all these amazing details, the icing on the cake for me is the “Big” Daytona print which makes this watch, in my opinion, the most desirable ref. 6239. The print creates a wonderful shape of a podium on which the long-lived Rolex crown rests above.

This stainless steel reference 6239 remains a striking fixture for the discerning collector. The silver dial is virtually spotless and the sub-dials remain even and a perfect contrasted black, with the print in the sub-dials extremely clear and near perfect. The lume plots are full and remain in tact, with only the 9 o’clock plot slightly blemished. The thickness of the lugs combined with the sharp drilled lug holes indicate the watch has had little polishing, with the caseback showing scratches and a brushed finish. The same goes for the Oyster rivet bracelet, which is dated to 1966. The original 300 UPH stainless steel bezel is in fantastic shape, with only slight fading around some of the numbers (70 at ten o’clock, 60 at twelve o’clock, and 190-300 at three o’clock). Finally, the Valjoux 72B is in excellent condition, with its original balance wheel components as indicated by the “ROW” USA import engraving on the balance wheel bridge.  This is a spectacular vintage Daytona sure to deliver for years to come.

The Rolex Daytona was first named in 1963, just one year after Rolex became the official timekeeper of the Daytona International Speedway. 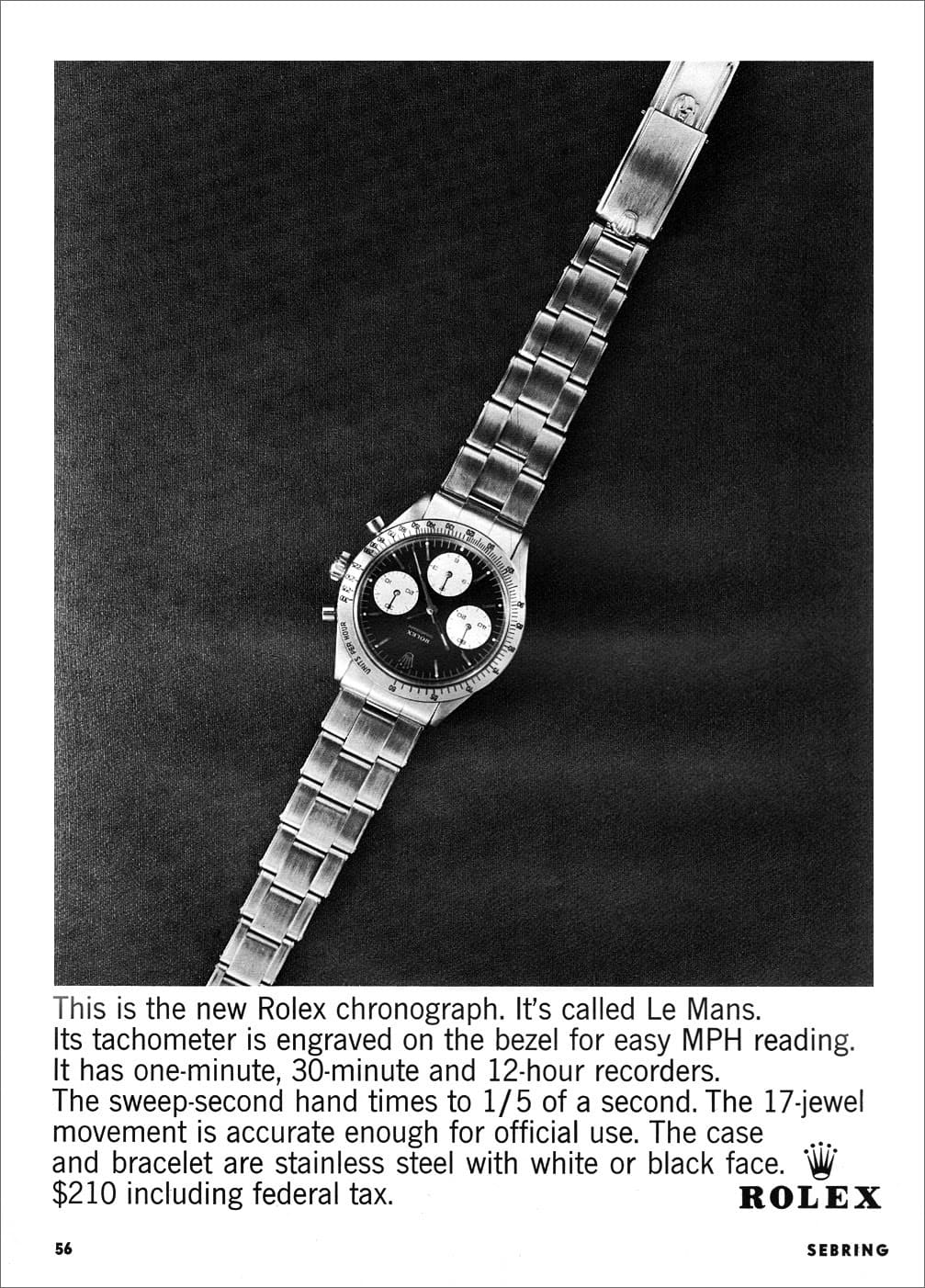 In 1955, Rolex launched its ref. 6234 chronograph that lacked both ‘Cosmograph’ and ‘Daytona’ on the dial. Rolex produced nearly 500 of these watches, with slight variations between the years, each year until 1961 when the model was discontinued. Known today as Pre-Daytona’s, these references lacked consistent styling as slight changes were made each year. Today, these Pre-Daytonas are rare and desirable.

Just two years later, the Rolex Cosmograph was introduced in 1963 as the ref. 6239. While early Rolex advertisements listed the ref. 6239 as the Rolex LeMans, Rolex later officially reintroduced the Daytona signature to the dial in 1964 to commemorate the brand’s status as the official timekeeper of the Daytona International Speedway. Designed as the ultimate timekeeping tool for endurance racing drivers, the oversized tachymeter bezel allowed drivers to time various facets of their tasks during races. The watch was produced with a hand-wound Valjoux Caliber 72 that was comprehensively overhauled by Rolex to include a bevy of upgrades, most notably with the brand’s own shock-absorption system.  The ref. 6239 quickly gained a reputation as a dependable instrument due to its shock and moisture resistance.

There are two main differences between the ref. 6239 and Pre-Daytona’s. All Pre-Daytonas bear monochromatic dials and had the tachymeter placed on the outer edge of the dial, while the ref. 6239 saw Rolex’s first use of inverse sub-dials and the first placement of a tachymeter scale on the bezel. These two changes proved to be a big difference as the public reception was strong. Most believed the watch to be more aggressive and dynamic, and these two traits still remain on Daytonas produced today.

Ref. 6239s were produced with bezels graduated to 300 units per hour until 1967, when it dropped to being graduated to 200. The earliest bezels of Rolex Daytonas were ‘hashed’ the entire way around, producing a radically cool look that is extremely collectible. Rolex made the change to the non-hashed bezel as most considered it to be difficult to read, switching to the hashes only around the figures below 100 unites per hour. 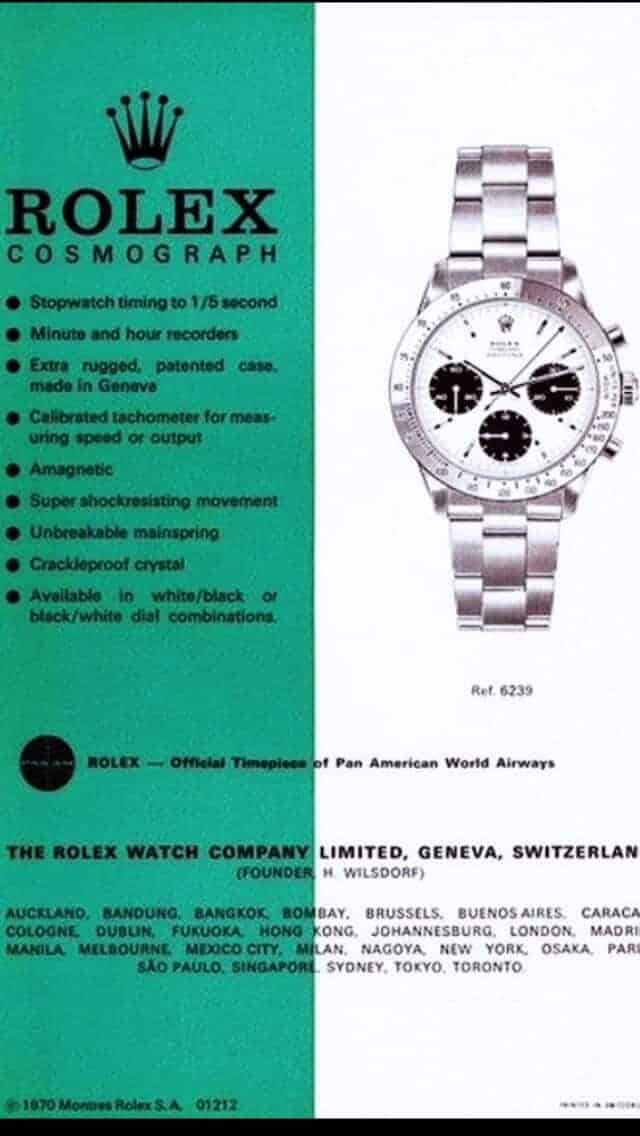 Despite the hype around the bezel and case condition, most collectors know that 90% of a Rolex Daytonas value is in the dial. Initial MK1 ref. 6239s, only made during 1963, were produced with a black dial and an exceedingly rare white dial. These white dials are sometimes referred to as a “Cream Dial,” as they were a matte white that appears cream colored. This dial is entirely different than the silver dial Rolex replaced it with just one short year later, and it is unknown why the dial color and finishing on the lighter variant was changed. From 1964 forward, ref. 6239s were produced with black and silver sunburst dials, the watch above is cased with the latter of the two.

Within these ref. 6239 dials, there are a number of differences that can even require more attention to detail. The earliest MK I Rolex Daytonas were produced with only “Rolex Cosmograph” on the dial, as discussed above, and with an underline just below. These same dials were fitted with not one, but two “Swiss” signatures below the six o’clock marker. This was a manufacturing error on the part of Rolex, as the first “Swiss” signature was printed below the minute track prior to the dial being fitted to watches. Once watchmakers fitted the first grouping of dials, they noticed the glaring mistake: the “Swiss” signature was cut in half by the case itself. The fix was something that would never happen today; instead of scrapping the dials, Rolex printed a second “Swiss” signature above the minute track straddling the six o’clock lume plot. Rolex quickly fixed this mistake after the MK I.

The watch available above was produced in 1966, just two years after Rolex’s ‘Double-Swiss’ error. This particular watch features the ‘Big’ Daytona script that followed the ‘Small’ Daytona script. In our opinion, the ‘Big’ Daytona logo is far more aesthetically pleasing than its predecessor. The ‘Big’ Daytona is more substantial on the dial, serving as a base for the pedestal or pyramid that is built by the two additional lines of text above it. The crown sits perfectly above this great shape and creates a fantastic balance that is not found on other ref. 6239s.

Despite all of these nuances and rarity to-boot, early ref. 6239s are just now beginning to receive the attention they deserve. As overvalued Daytonas started to come down in the last year, the first Daytona finally started to receive some much needed love. As Ben Clymer says, “Just like the A-Series Royal Oak, the 3700 Nautilus, the Big Crown Submariners, and a dozen other firsts, the Mark I 6239 is the blueprint on which a legacy has been built.” If you were in the market for a serious Daytona, would you settle for anything less? Instead of going for a new Ceramic Daytona or even a later Paul Newman, I’d challenge you to find an all-original 6239 that retains much more historical significance than those other, aforementioned pieces. Scroll back up to inquire about our pristine 1966 Rolex “Big” Daytona for a chance at one of these historic Daytonas! 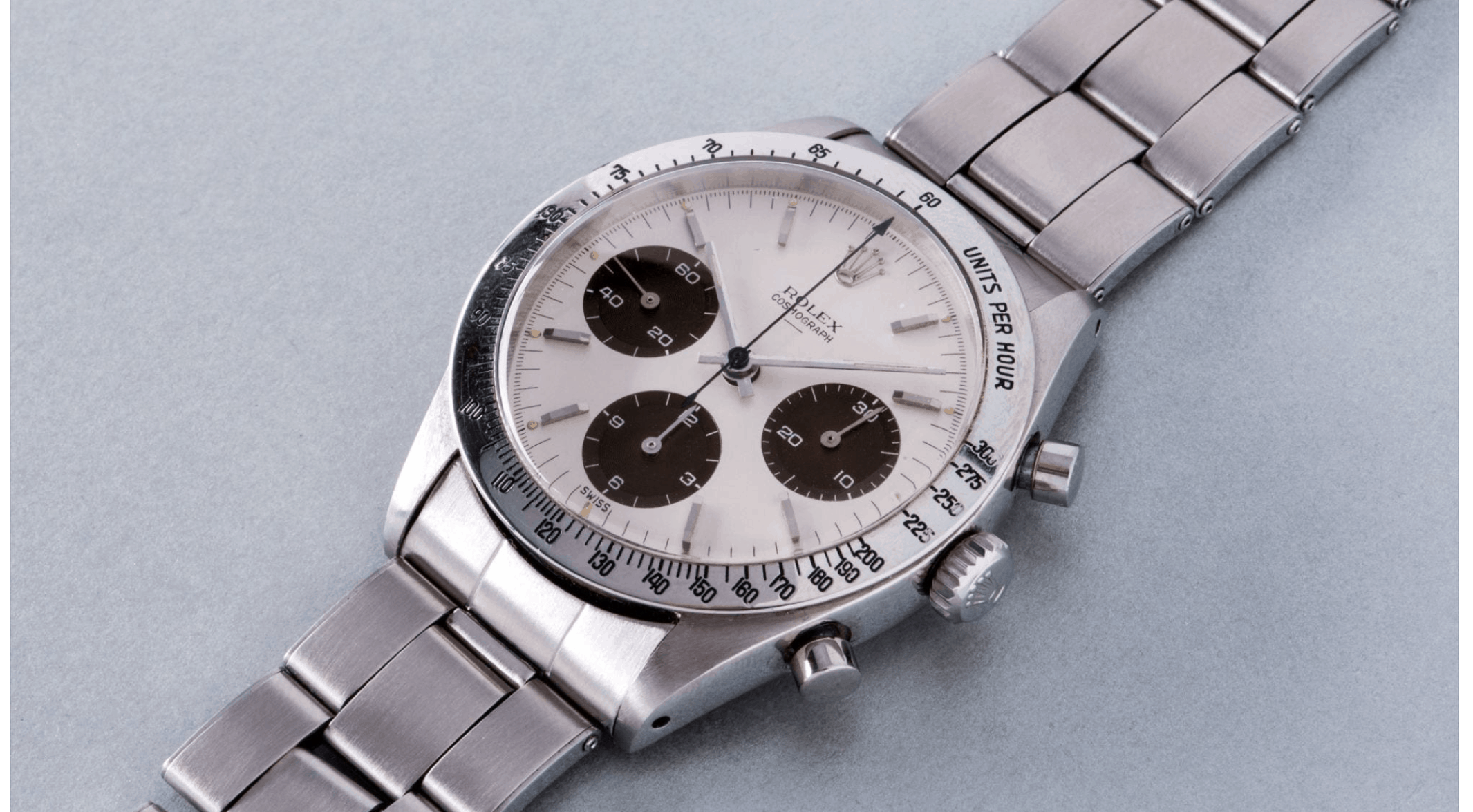