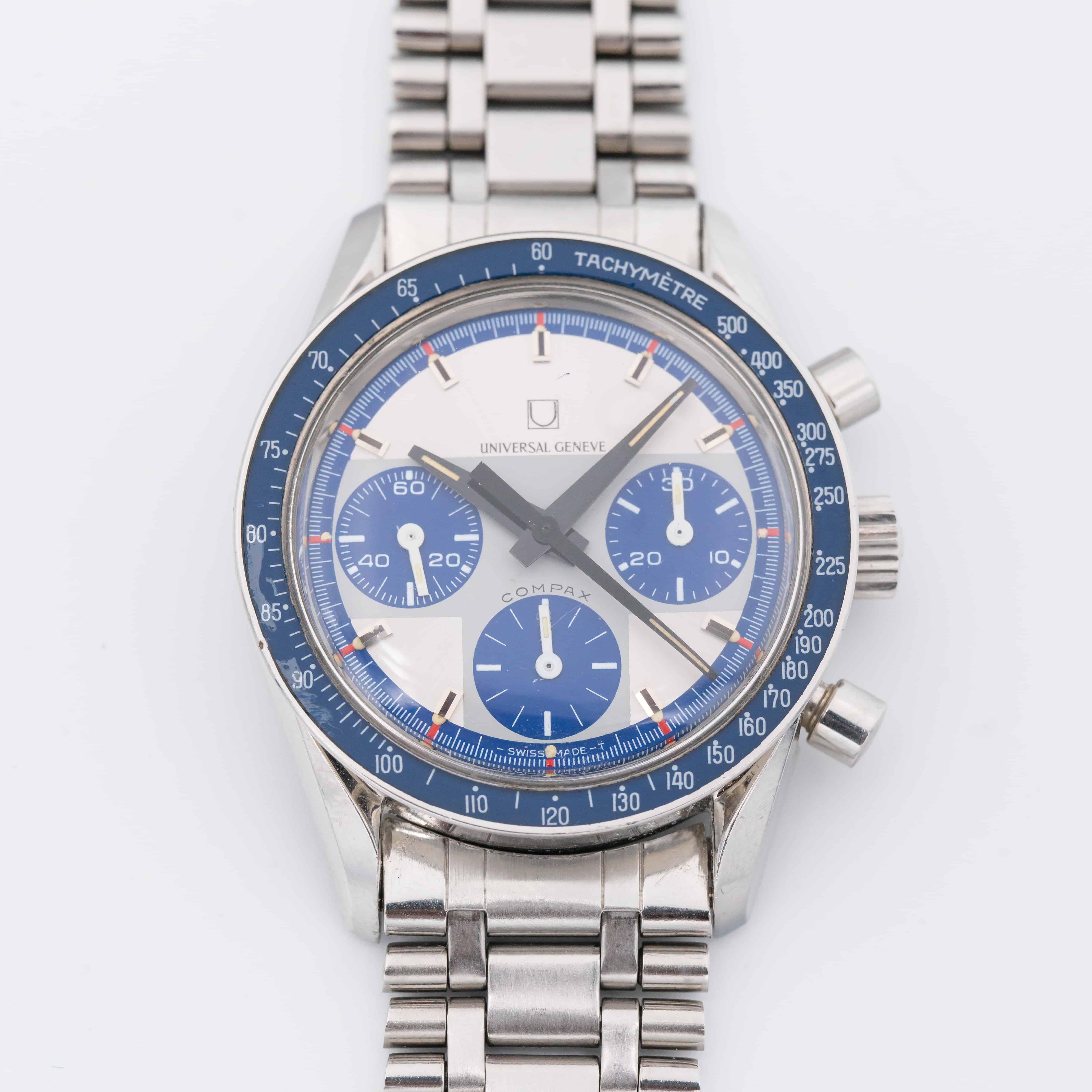 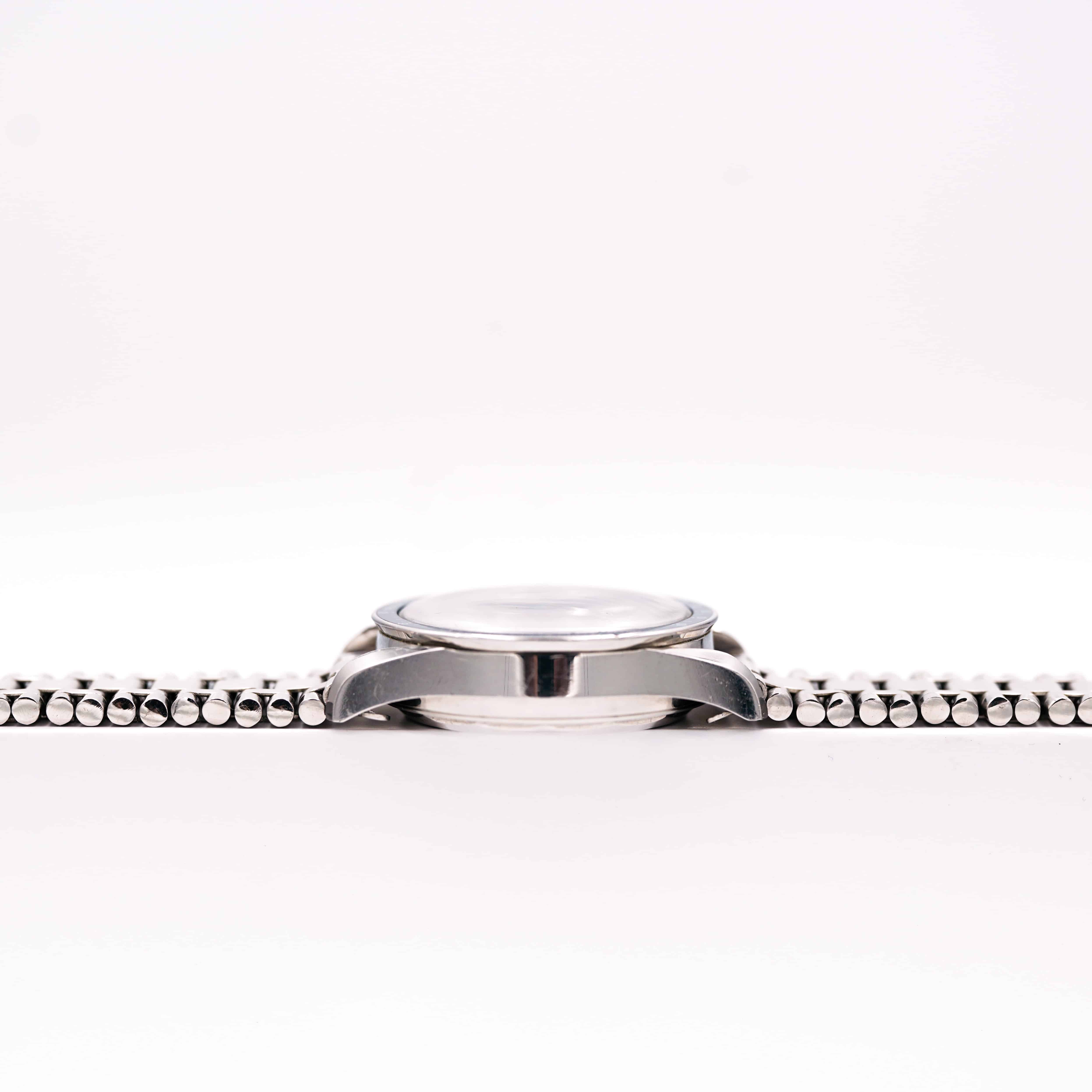 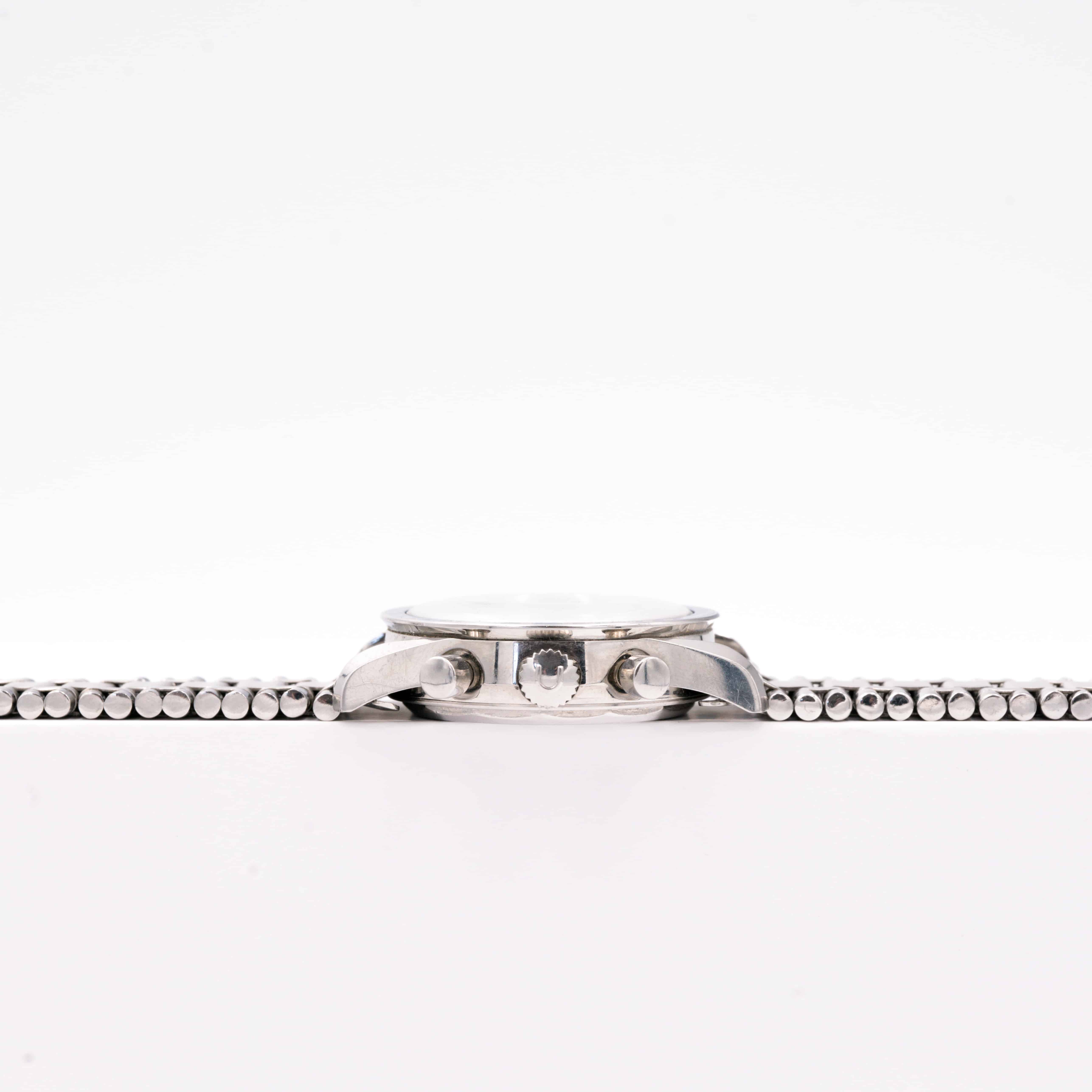 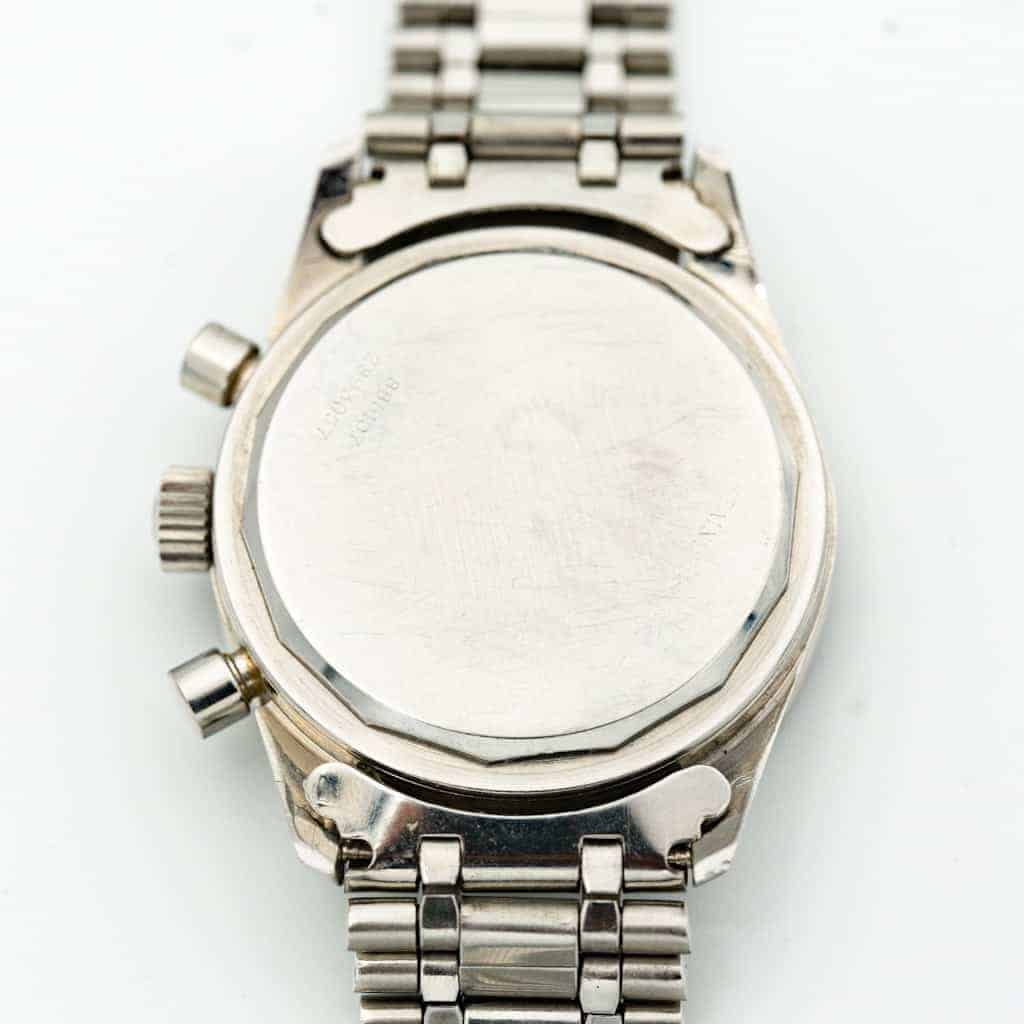 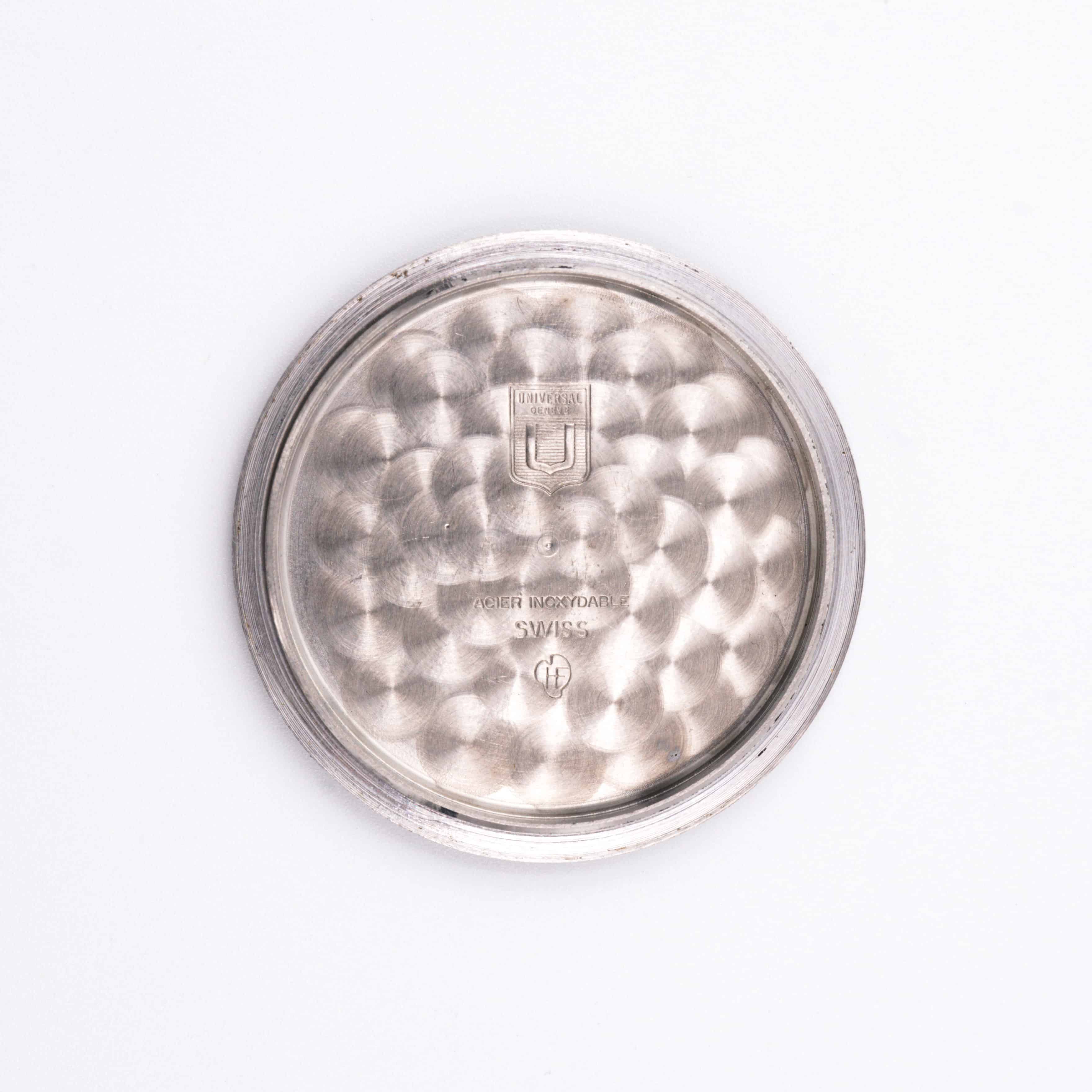 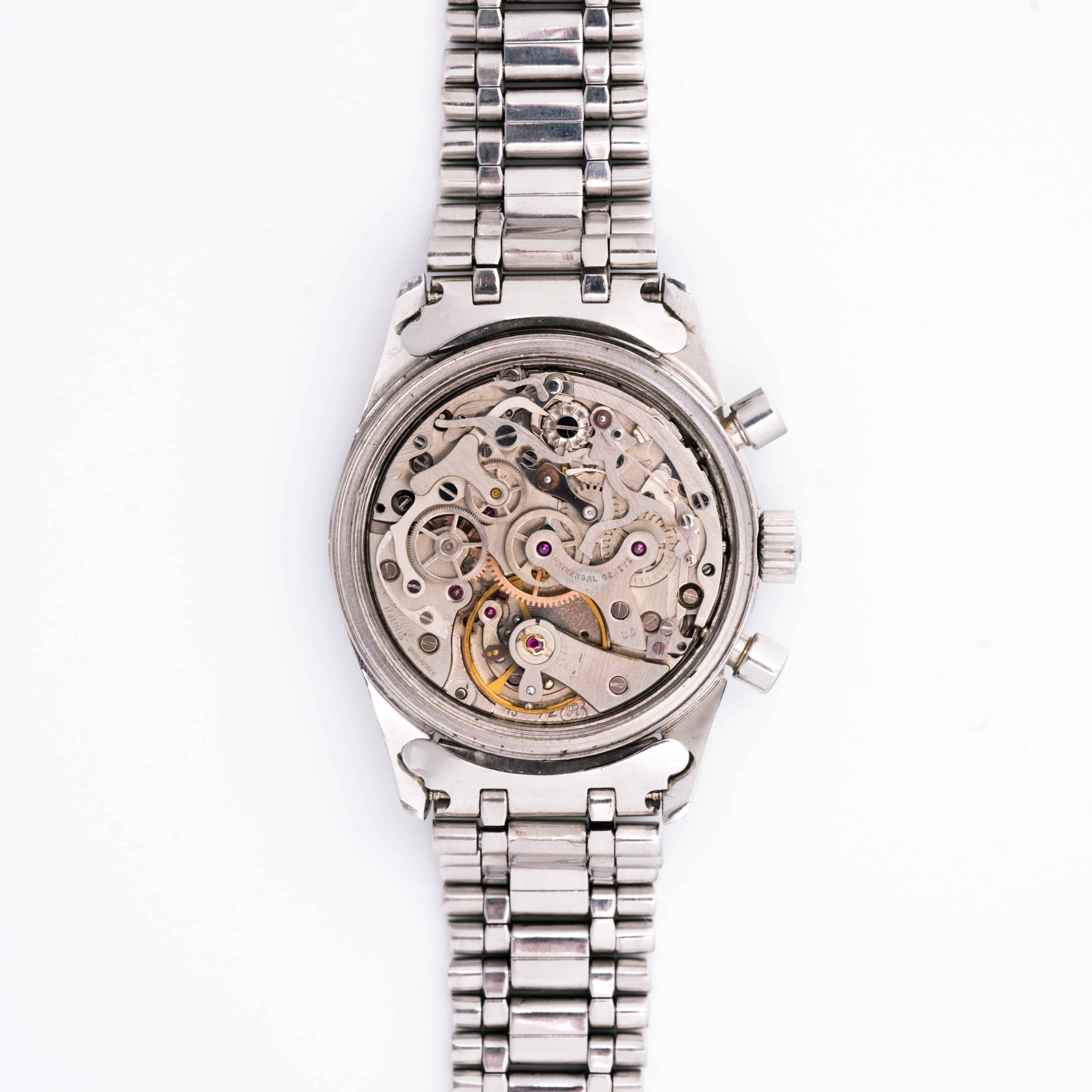 This Universal Genève “Exotic Nina Rindt” combines increased rarity with one of the most beautiful exotic dials on a chronograph.

Universal Genève has proven time and time again that they produced watches with quality that far exceeded their price point. The company even sold their famed Tri-Compax alongside the unobtainable Patek Philippe ref. 1518 at the Henri Stern Agency in New York. The Universal Genève Compax was no exception. The genesis of the Compax model extends back to the 1930s, in some instances even predating the name of the company as some were branded Berthoud (the precursor to Universal). Throughout the 1960s, Universal had shifted to a beefier, more substantial design that embodied the rising trend of sport watches. While still sized at 36mm, the case saw the introduction of turned lugs and more pronounced hour markers. These have become known as the “Nina Rindt” Compaxes as one was famously photographed on the wrist of Nina herself, the wife of the famous Formula One Driver, Jochen Rindt.

This particular ref. 885.107 silver “Exotic Nina Rindt” is the sister to the blue dial ref. 885.106 variant and both are commonly known to be the rarest of “Nina Rindt” family. Most believe that less than 20 of each reference exists today, making it far more difficult to acquire than the “exceedingly rare” ‘Paul Newman’ Daytona.

The case of this example rains unpolished as the reverse shows incredibly sharp reference and serial numbers. The original bezel is clearly shown, with the accent over the e in TACHYMÉTRE, and is in fantastic condition. The strongest component of the watch is the dial itself, which is the finest we’ve seen on an “Exotic Nina Rindt.” In sunlight, the sunburst finish shines bright, contrasting the fantastic cream finish that wraps around the sub-dials. Each hour marker retains its original lume material, with the red markers on the track as bright as ever. The original handset remains with the watch, as the blued steel of the hour, minute, and seconds hand shift color in different light. The Henry & Cie bracelet is in untouched condition and is delivered with two different crowns, one that matches the late 1960s Universal logo that appears on the dial, and the older logo crown that was delivered with the watch. Finally, the watch came from its original owner and is delivered with original box & papers as well as a certificate of authenticity from Universal.

All together, the simple truth is that this watch is insane.

Universal Genève would have won every 'Value Proposition' discussion as the brand always produced quality that always exceeded price. 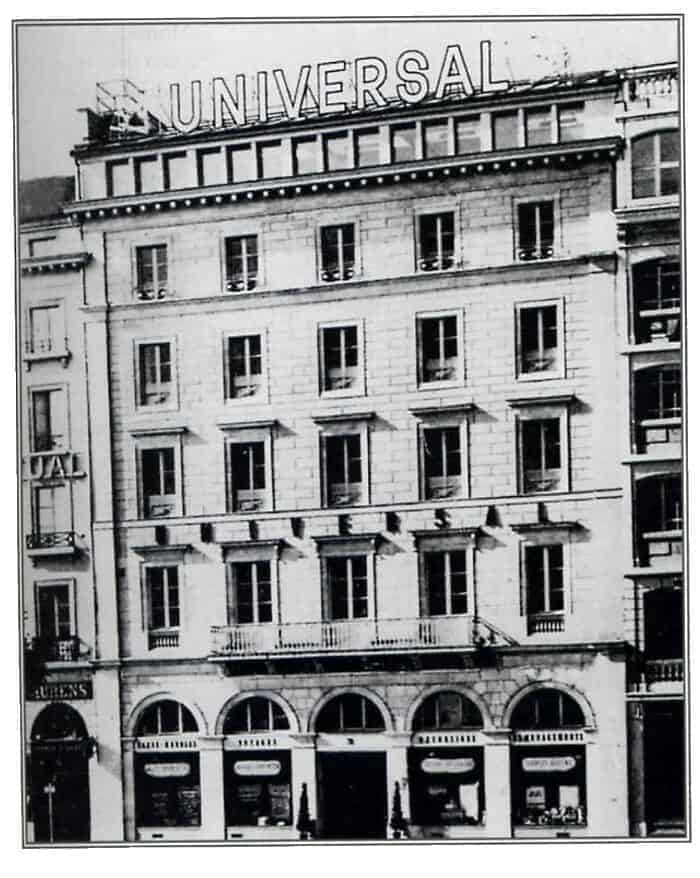 Universal Genève was founded in 1894 by Numa-Emile Descombes and Ulysse Perret as ‘Universal Watch.’ In 1917, the company brought a first to the world by releasing a wrist-worn chronograph. At the time, wristwatches were mostly reserved for women, but Universal saw the increase in functionality as the one wouldn’t need an extra hand to hold or operate the chronograph.  Two years later, the company relocated to Geneva after briefly being based in Le Locle. This move cemented the name for the brand as Universal Genève.

1933 brought the tragic passing of the company’s founder as his son was poised to replace his father, keeping the business in the family for the next 30 years. Perret’s son began the big push for mass productionas they began creating some of their most regarded models today. In 1934, Universal produced their first serially produced wristwatch: the Compur. In 1936, the brand launched their first pilots watch: the Aero Compax. The same year, the company replaced the Compur name with Compax which served as the company’s first serially produced version of their wrist-worn chronograph. The company would then begin to use the Compax architecture to build a number of different models that included various ‘complications.’

Shortly after, Universal began work on one of their most prolific collaborations in their history. Working with Hermès, Universal designed the Pour Hermès line of chronographs that were based off of Universal’s existing series of Compax chronographs. Square pushers, telemeters and tachometers, and Breguet balance springs came together to produce one of the company’s rarest creations to date. Advertisements show this collaboration and are exceedingly desirable today.

The late 1930s brought the start of WWII as the brand began gearing up for the production of military watches. Watches were delivered across Europe to both Axis and Allied Powers. The first to receive Universal military watches were the Dutch Royal Forces with every watch featuring then-Queen Wilhelmina’s initials on the dial. As the war progressed, Axis Powers such as the Royal Italian Air Forces and Nazi Luftwaffe began receiving watches. As legend goes, Nazi Reichsmarschall Hermann Göring exchanged his oversized Compax for a cyanide pill to his cell guard during the Nuremberg Trials. Despite this tale, most believe that Göring simply administered his Nazi issued cyanide capsule and the watch was merely a coincidence. The war closed with Universal on the right side of history as U.S. President Harry Truman was famously spotted wearing his Universal Tri-Compax at the Potsdam Conference in the Summer of 1945. The watch was engraved with the inscription “WORN AT POTSDAM – July 1945 – BY Harry Truman.”

Speaking of Tri-Compax’s, the company launched the now well regarded model in 1943 at the Basel Watch Fair amidst the destruction of WWII. The watch bears an uncanny resemblance to the layout of the Patek Philippe ref. 1518, with some believing that the watch was a direct response to that model as the brand potentially hoped to provide an affordable alternative. Even more amazing is that the brand was able to secure a relationship with the Henri Stern Watch Agency in Manhattan, the sole distributor of Patek Philippe in the United States. This allowed patrons to view both the incredulously expensive ref. 1518 alongside the Tri-Compax.

After WWII, Universal began experimenting with more casual models as they had the great fortune of working with world famous watch designer Gèrald Genta. Genta produced one of his first watch designs that resulted in the creation of the Polarouter, announced in 1954 with a caliber 138SS Bumper movement. One short year later, Universal replaced with caliber 138SS with the innovative caliber 215 micrometer movement. It wasn’t until 1958 that patrons saw the name change from Polarouter to Polerouter. The model was produced until late 1969 as Universal explored many variations, even working with Scandinavian Airlines to produce Polerouters for their pilots.

The 1960s also brought the rapidly increasing popularity of sports watches, and as a result, Universal began changing their existing product line to capitalize on the trend. Watches like the Compax and Tri-Compax were redesigned in larger cases and their dials were slightly changed. The resulting watches were more aggressive and robust in appearance, catching the eye of many celebrities and well known individuals. One such individual is Eric Clapton, otherwise known as Slow Hand, God, or the best guitarist of all time (sorry, John Mayer). One of Clapton’s frequent wears was a panda dial Tri-Compax that has been well photographed on the musicians wrist during his time as Cream’s lead guitarist and vocalist.

The Compax was spotted on the wrist of Nina Rindt, the wife of the famous Formula One Driver, Jochen Rindt. As a result of this appearance, the 1960s Compax was dubbed ‘Nina Rindt.’ These watches were produced in two dial colors, black and white, both with contrasting sub-dials. Additionally, Compaxes were produced in extremely low production numbers with a pair of exotic dials. It is known that less than 25 of each reference, both blue and silver dials, still exist today and it is not entirely known why they were produced in such low numbers.

After the golden 1960s, Universal did its best to survive the Quartz Crisis. Even going so far to embrace the very trend that was resulting in the dramatic decline of the Swiss watch industry. Producing quartz movement Universals that proved to be less desirable than their Japanese rivals. Ultimately, the brand found itself in great decline as it had to sell of the majority of its assets. After trading hands a few times, the brand finally went dormant. Though still around today, the future for the brand is uncertain as it sits parked.

Despite the questionable existence of Universal today, it’s impossible to deny the impact the brand had prior to the Quarts Crisis. During its peak, Universal was more valuable than Omega, Longines, Baume et Mercier and more. For a chance to own one of the rarest and most beautiful Universal Genève chronographs, if not one of the most beautiful chronographs in general, scroll up to contact us.