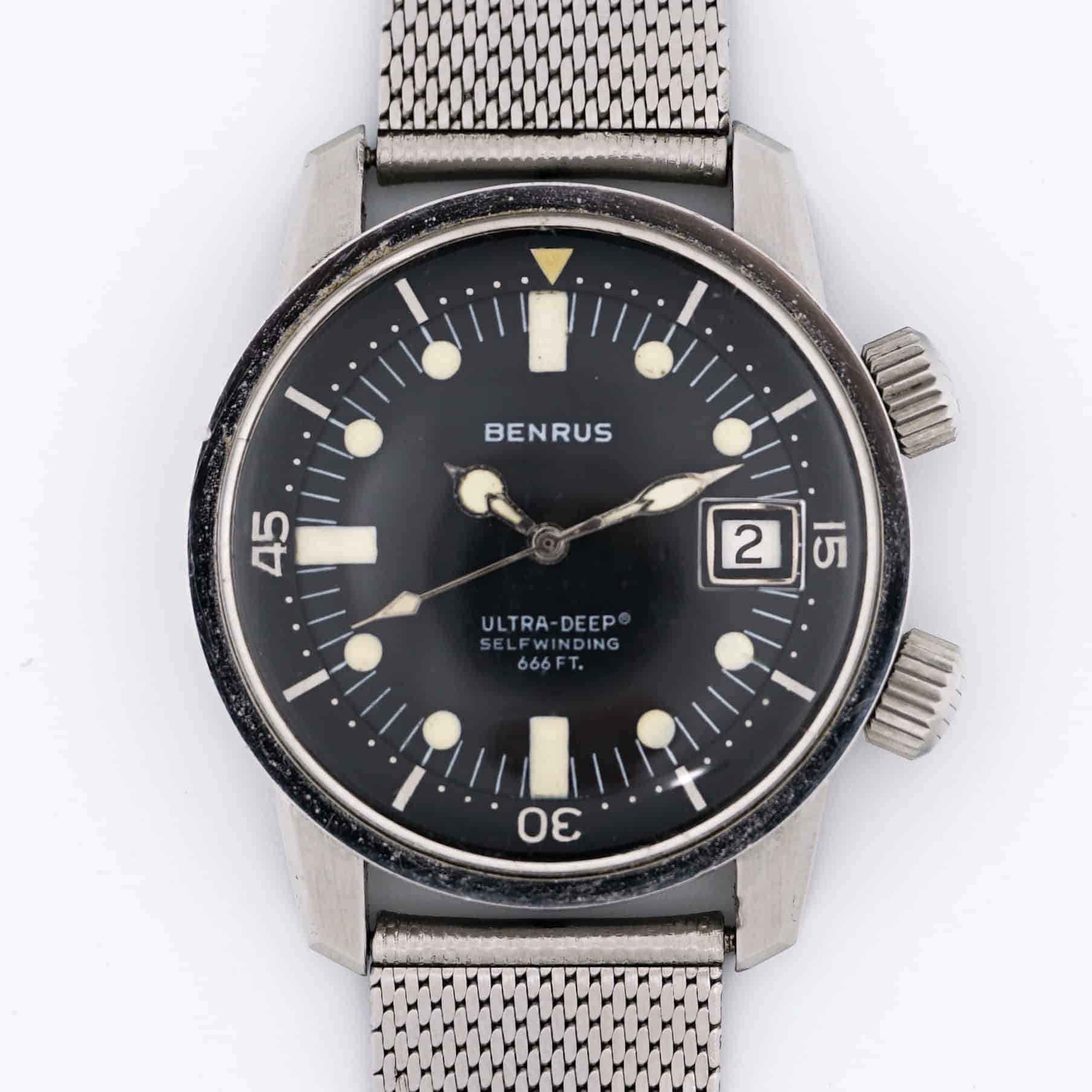 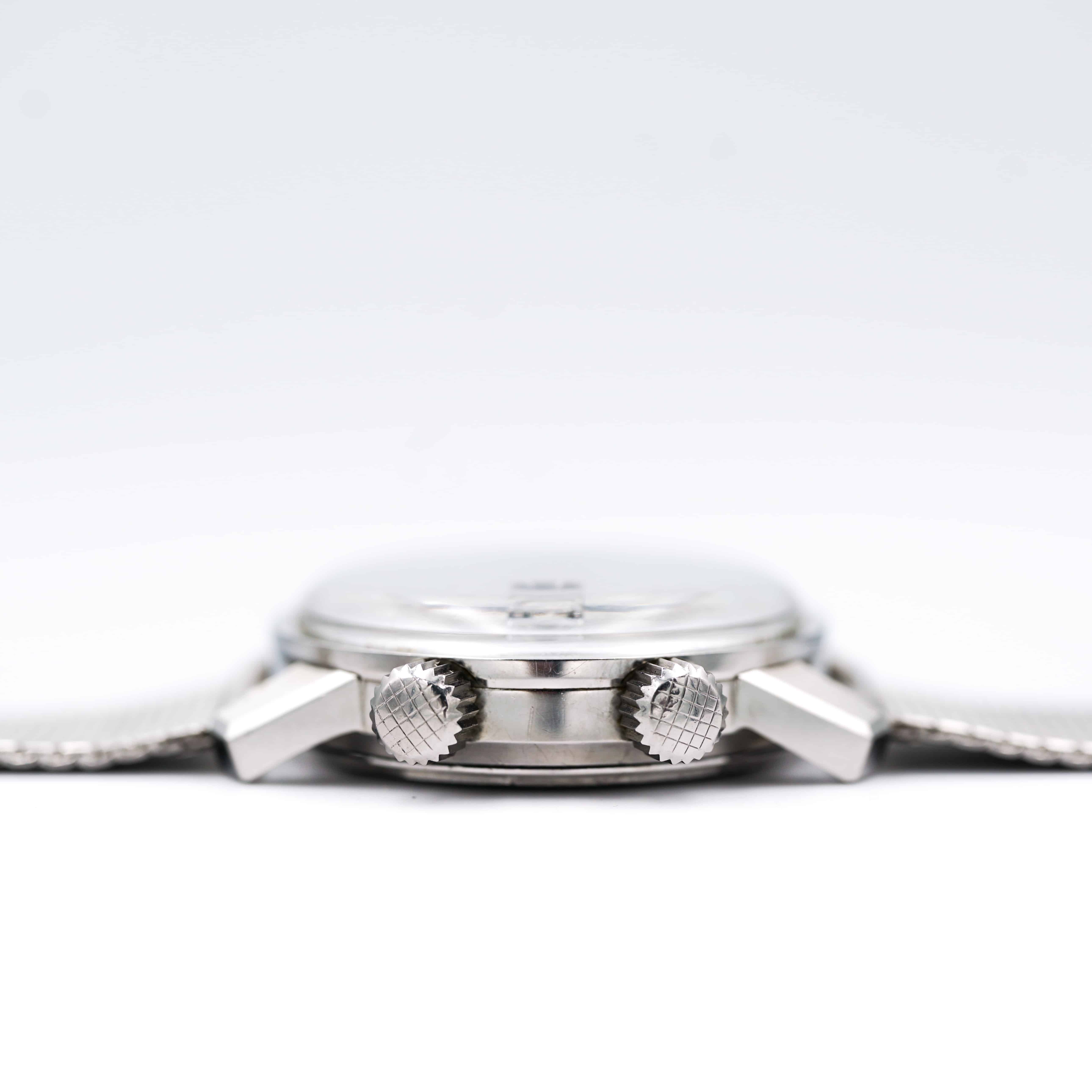 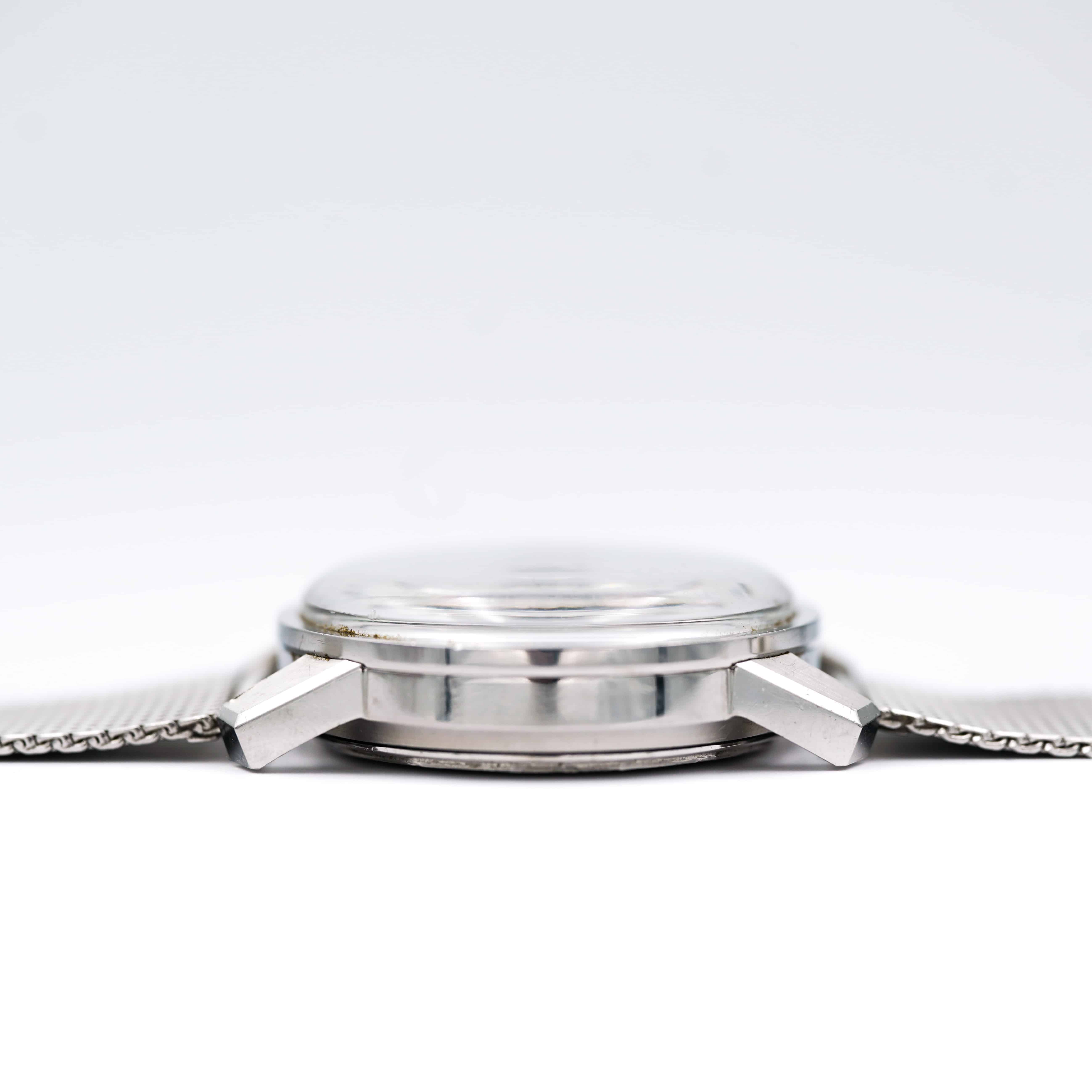 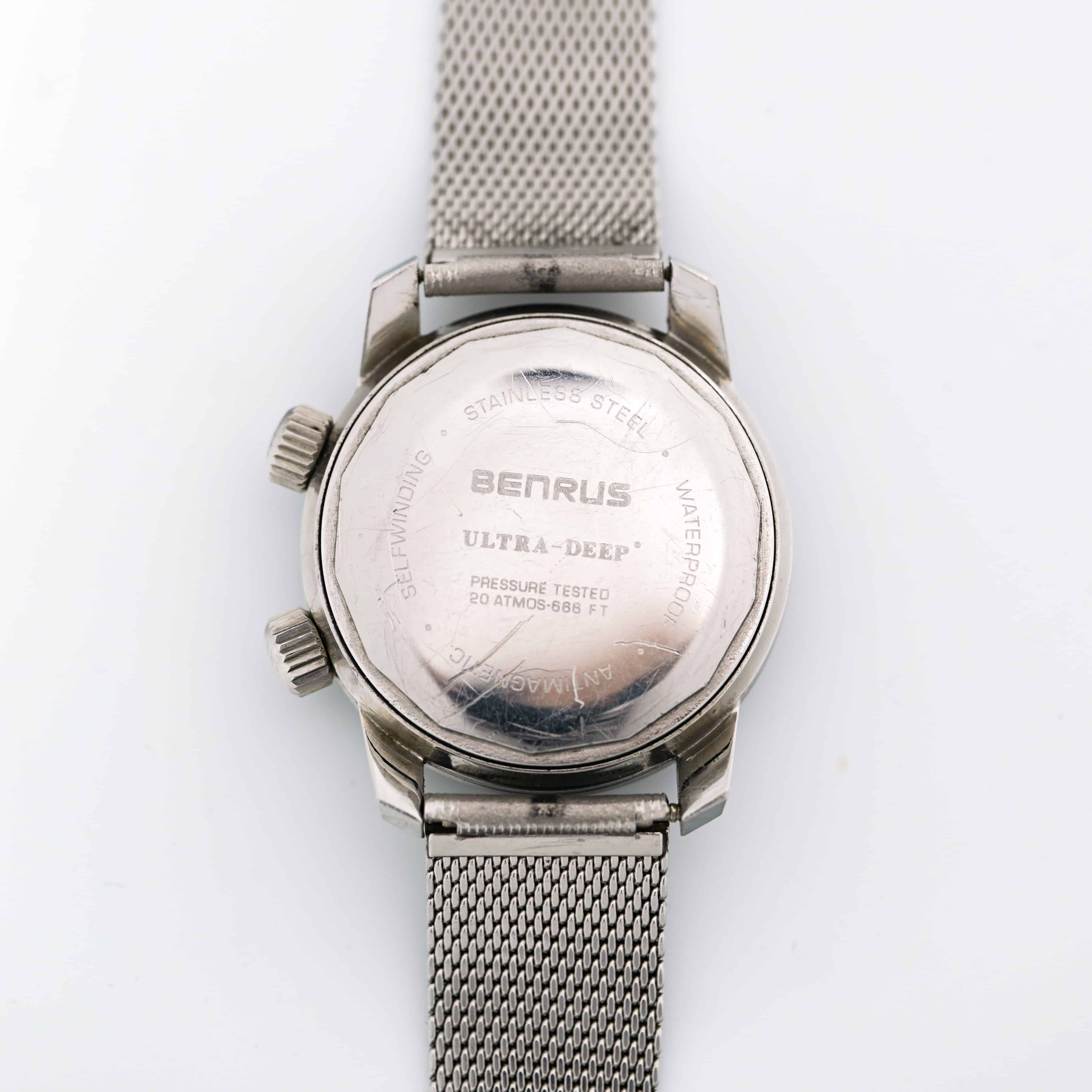 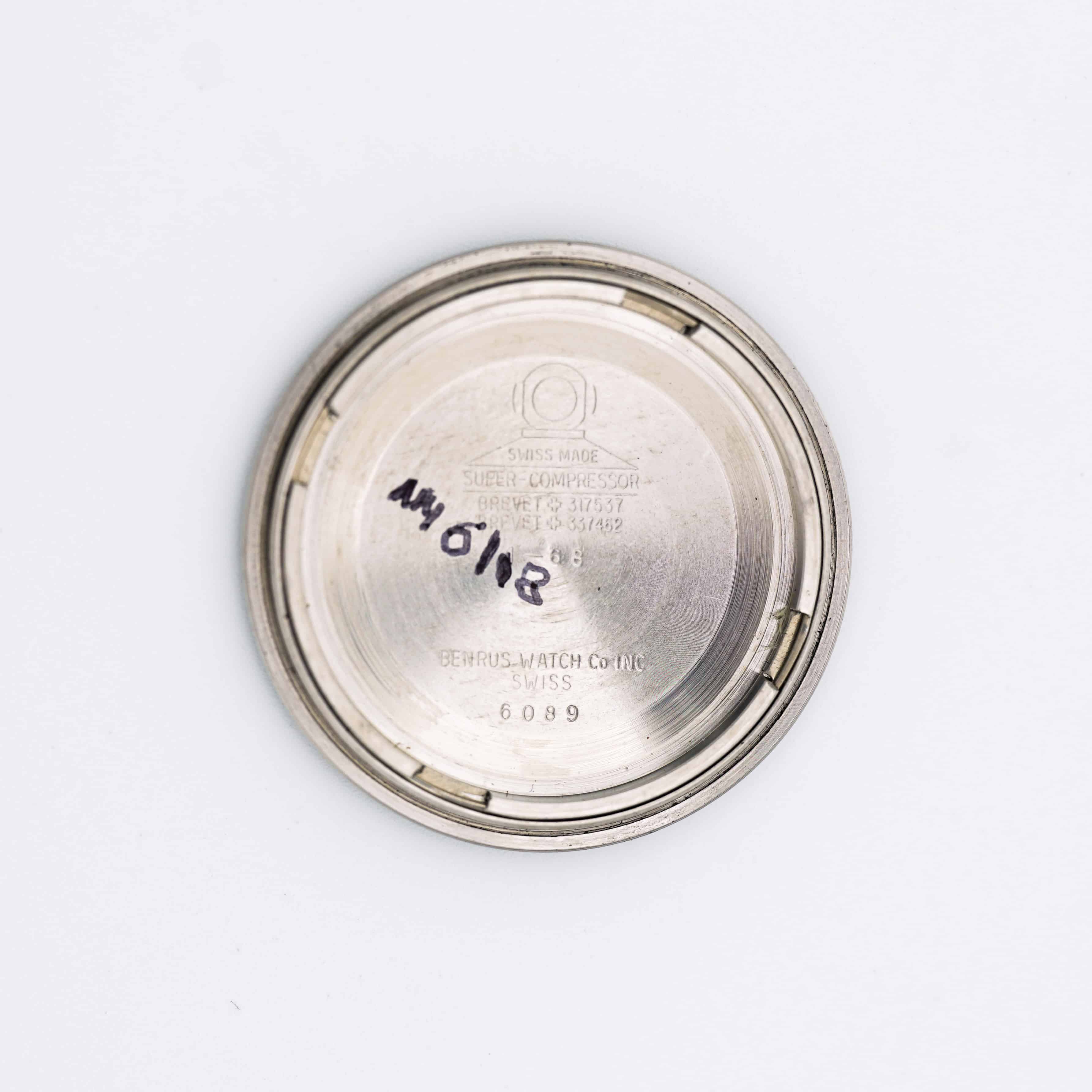 This Benrus Ultra-Deep has everything you’d want in a diver and so much more.

Vintage dive watches flourished in the 1960s as both major and smaller manufacturers rushed to deliver the ultimate diving companion. Benrus carved out its spot amongst the dive watch legends under the name “Ultra Deep.” This particular example is the desirable two-crown Super Compressor version with the inner rotating bezel. The case measures nearly 37mm with two large crowns at two and four o’clock, adding some well appreciated heft to the watch. The case, made by EPSA (Ervin Picquerez, S.A.), is a Super Compressor case that maintains the original Brevet patent numbers that were engraved on the back of the case back, proving the watch’s purpose as a tool for divers. The dial itself is clean with large luminous indexes and elongated minute tracks making for a particularly legible dial. My favorite element of the watch have to be the luminous handset as they show great separation from hands typically found in the dive watch lexicon.

The present example is in very good overall condition. The case itself appears unpolished as it still retains the original beveled lugs, though the casebook shows some deep scratches throughout. Both crowns are in great shape with the cross-hatch pattern showing strong. The dial remains the strongest element of the watch as it is in fantastic, original condition. The lume on both the hands and hour markers appear even and are slightly creamy, with small imperfections on the twelve and one o’clock hour markers. The movement is in running condition, keeps accurate time and advances the date correctly at this time.

Benrus was one of the great American watch companies that even troubled some of Switzerlands finest. 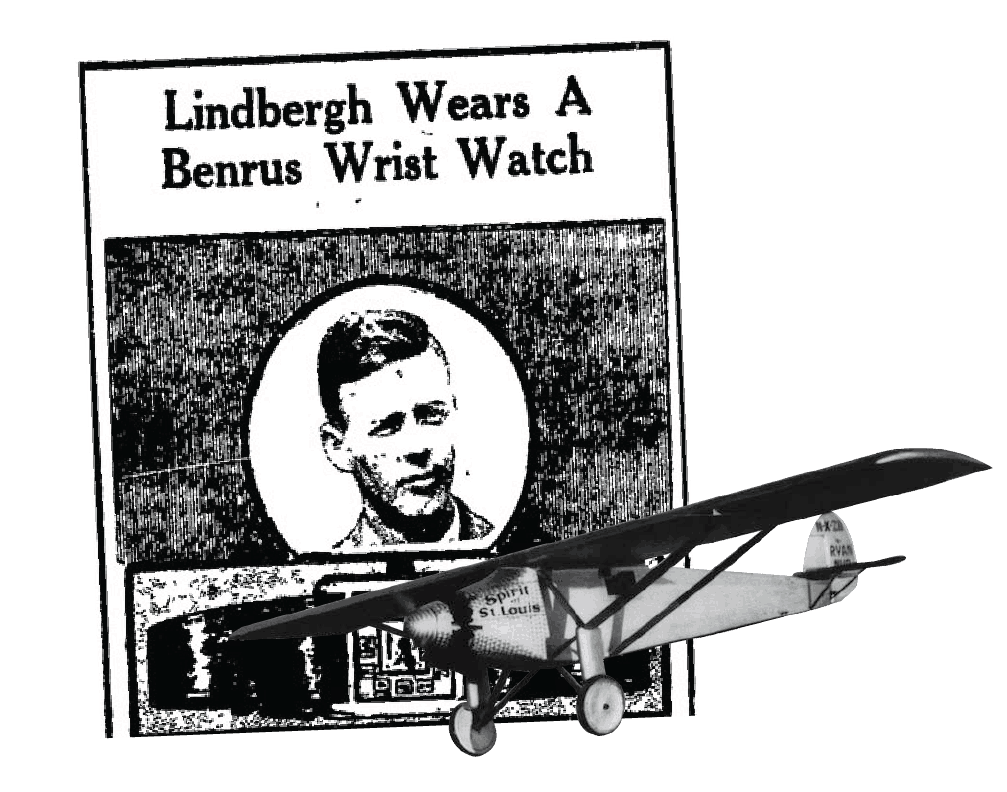 For a full history of Benrus, click here to see our first journal entry.

Founded in 1921, the trio of Lazrus brothers began the journey of a brand that would go on to be a dominant force in American watchmaking. Benrus aimed to produce affordable tool watches by importing movements and parts. The company’s history is somewhat of a rollercoaster as they made hasty decisions altering production in attempts for military contracts and dealt with major legal issues throughout their history. Ultimately, Benrus fell victim to a combination of the founding members passing and the Quartz Crisis.

Early on, the brand launched one of their most successful marketing campaigns with Charles Lindbergh. Advertisements showed a Benrus Tank watch with the title “Lindbergh Wears A Benrus Wrist Watch,” a major success for Benrus as Lindbergh was arguably the biggest celebrity in the world at the time. Following this major success, Benrus knocked it out of the park just three years later with a successful campaign for their new sportsman’s watch with the help of Babe Ruth. The new advertisements showed illustrations of Babe Ruth hitting with a Benrus on his wrist, a terrifying site as the lume likely was rolling around the case like sand in a shaker! 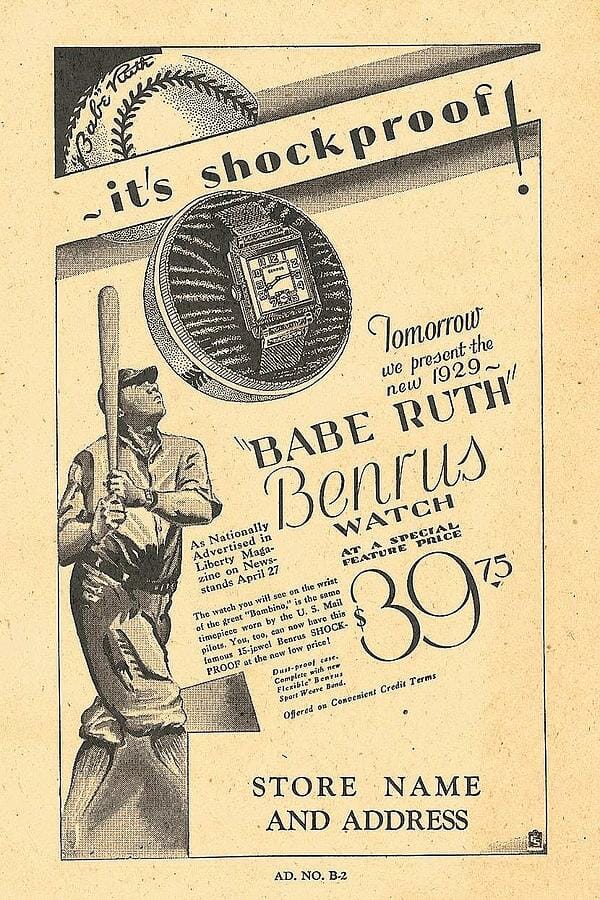 Benrus continued the success of Babe Ruth’s watch by providing aspirational Americans with affordable luxury designs. These iconic watches varied in design greatly from cushion cases to tank cases as the brand continued its growth throughout the 1930s. The company rose to the patriotic occasion as the second World War approached, as they refocused production to take military contracts for timing systems (fuses, etc.) commonly used in munitions. Despite some claims stating the company stopped manufacturing watches during WWII, Benrus was able to launch one of  today’s most commonly known Benrus’: the Sky Chief. The chronograph was developed alongside the world’s leading aviation companies and the watch quickly became the “Official Watch of Famous Airlines.”

After WWII came to a close, Benrus continued its climb as it fully embraced print advertising in the 1950s. It’s affordable luxury watches were seen by a wider audience than ever before as the company increased distribution and production. Dress and casual watches were produced and were advertised alongside one another as the decade became the company’s most profitable and most controversial ever. The controversy arose as Benrus actively began a hostile takeover of the famed Hamilton Watch Company as they attempted to increase their American production. After a short legal battle, Benrus and Hamilton agreed on a settlement that would impact Benrus for years to come.

The 1960s saw the introduction of its successful Ultra-Deep and standout pieces such as the Sea Lord, the Citation and the avant-garde Dial-O-Rama. Only three years into the decade, Benrus found itself the lucky producer of the Democratic National Convention’s gift to the late President John F. Kennedy. The DNC commissioned a unique Benrus for JFK, a 14k self-winding time and date watch engraved on the back ‘TO OUR PRESIDENT J.F.K.’

Continuing the monstrous decade for Benrus, in 1964 the company was awarded the MIL-W-3818 order for the standard issue Vietnam field watch. The field watch was given to nearly every service member in Vietnam and further cemented Benrus’ position as one of the finest producers of military field watches. Further proof came four years later when actor Steve McQueen wore his own Benrus field watch in the iconic 1968 film ‘Bullit.’ The Benrus 3061 is now commonly known as the ‘BULLIT’ Benrus. With the famous ‘Bullit’ Mustang selling for $3.74M (nearly 30x the market value of a standard 1968 Mustang Fastback), could one assume that the original ‘BULLIT’ Benrus would sell for 30x its own market value? Maybe not. But if someone knows where that watch might be, we’d love to be the ones to find out!

And to finally round out the fantastic rise of Benrus, we come to the 1970 release of two iconic dive watches: the Benrus Type I and Type II. These dive watches became the military standard for the UDT (Underwater Demolitions Team), the predecessors to the Navy Seals, the Army and even the CIA. These watches today wear incredibly well and have a soft spot in the hearts of many collectors.

Despite the brand’s name still existing today, most believe the true heart of Benrus was a victim of the Quartz Crisis. During its height, Benrus was one of the most successful American watch companies as it tugged on the patriotic heartstrings of the typical 20th century American. Benrus’ have been worn by Presidents, famous actors, all-time baseball players, record breaking pilots, and by soldiers defending democracy and tyranny around the globe. The brand had an incredible run and unfortunately was killed by the well known Quartz Crisis. Today, the brand only lives by name as the current owners produce a Heritage Collection with a smattering of Japanese and Swiss-made off-the-shelf movements.

For collectors who want to experience Benrus in its heyday, look no further than the Benrus Ultra-Deep offered in our inventory. If you’re interested in a different Benrus model, reach out to us here and we’ll be happy to help you experience the great watches of Benrus!