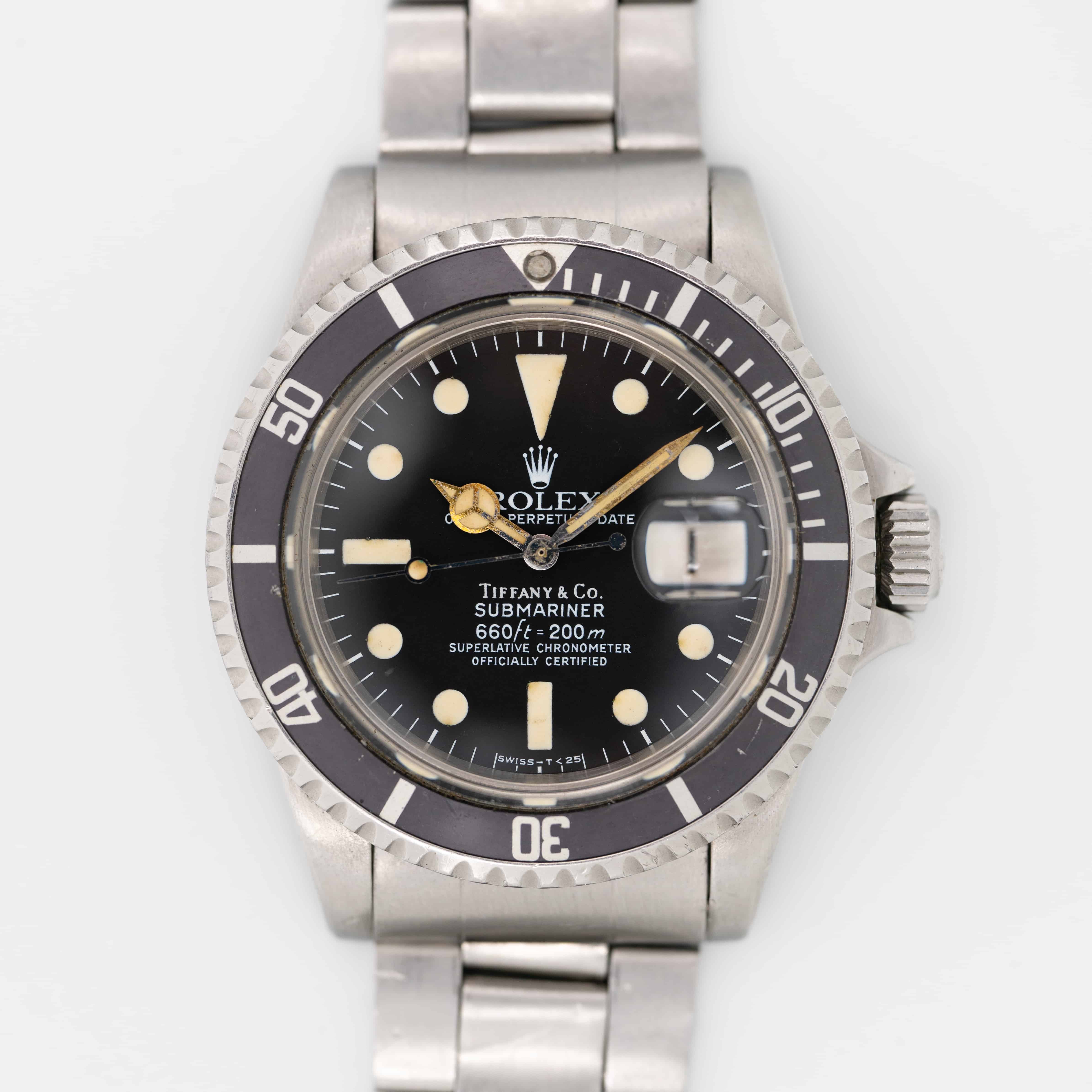 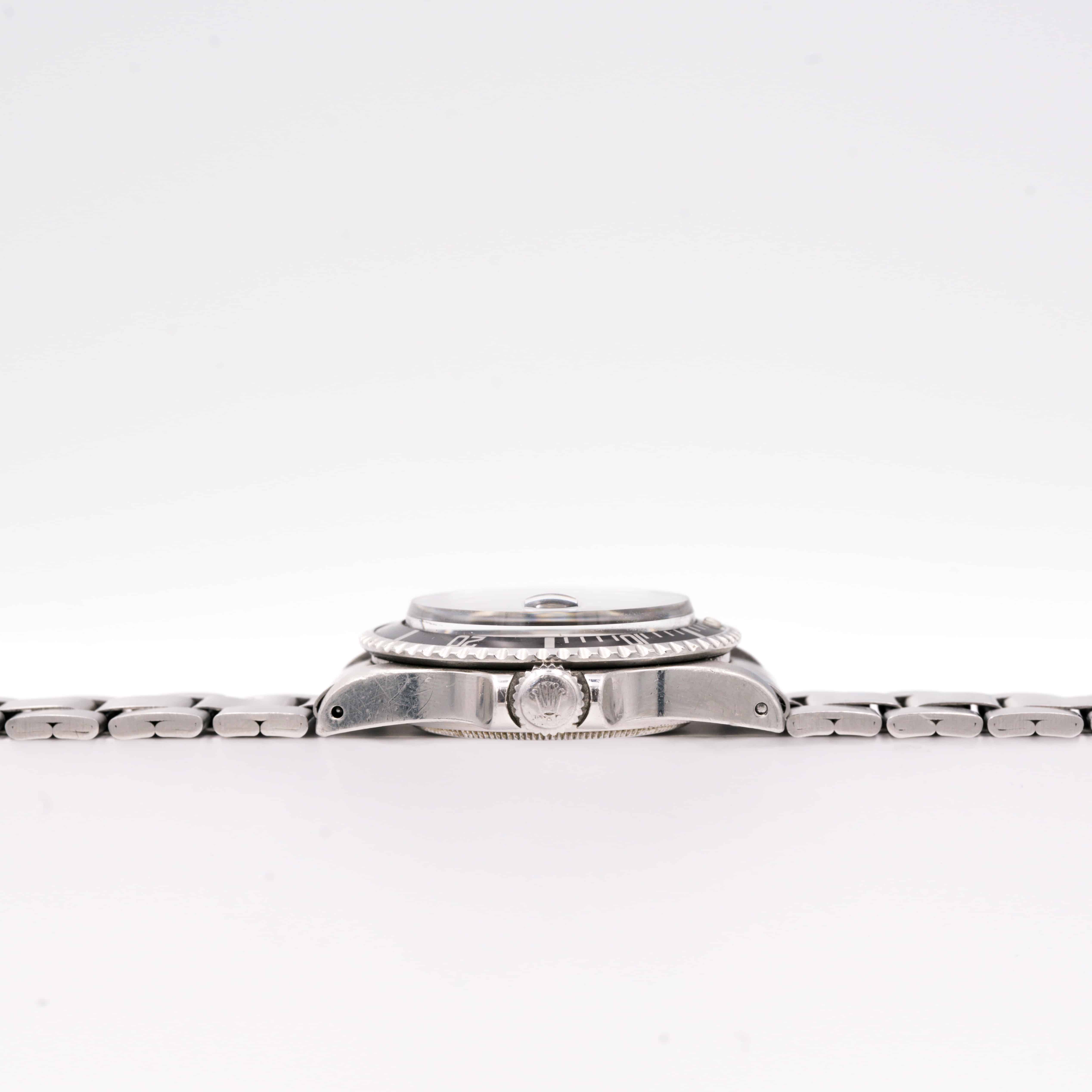 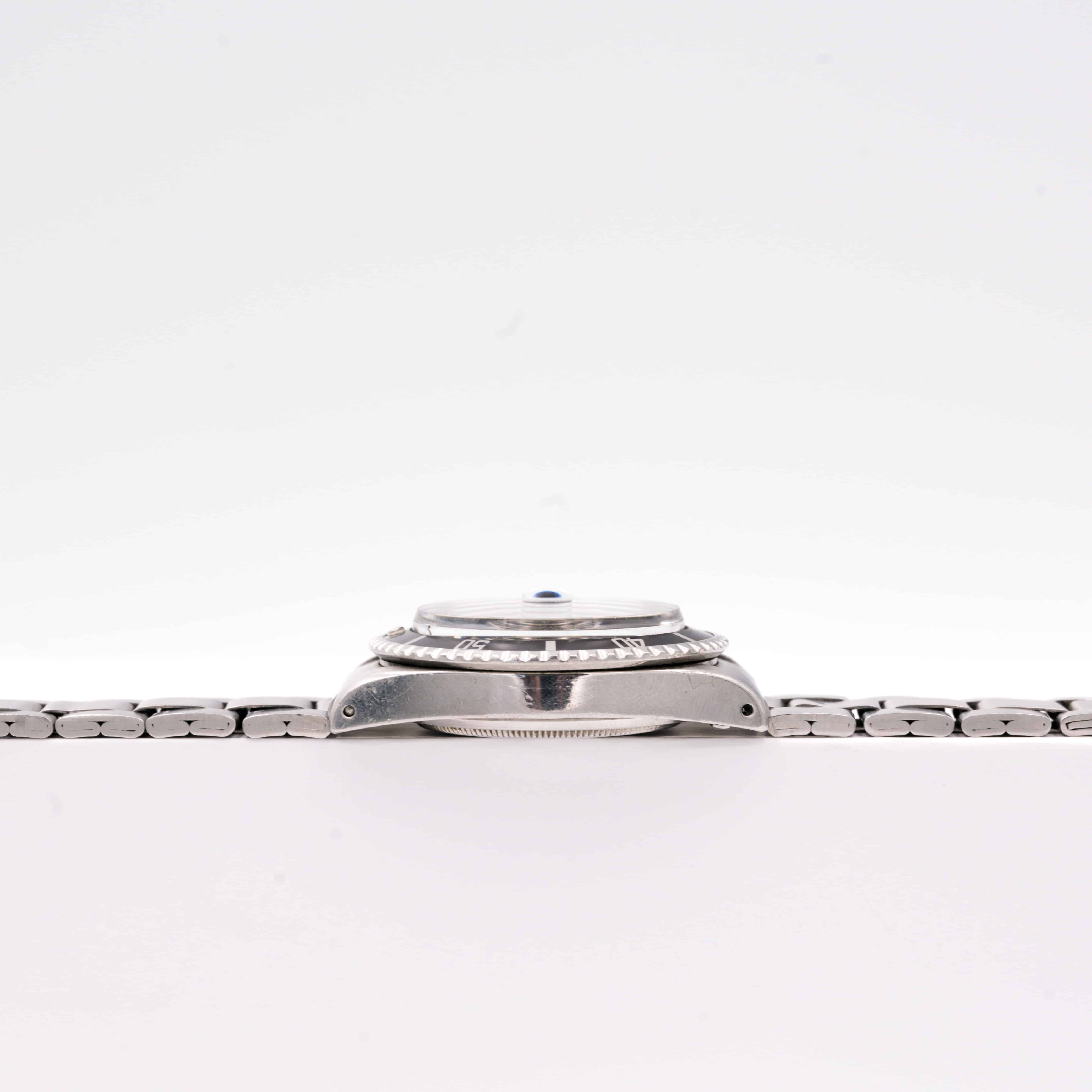 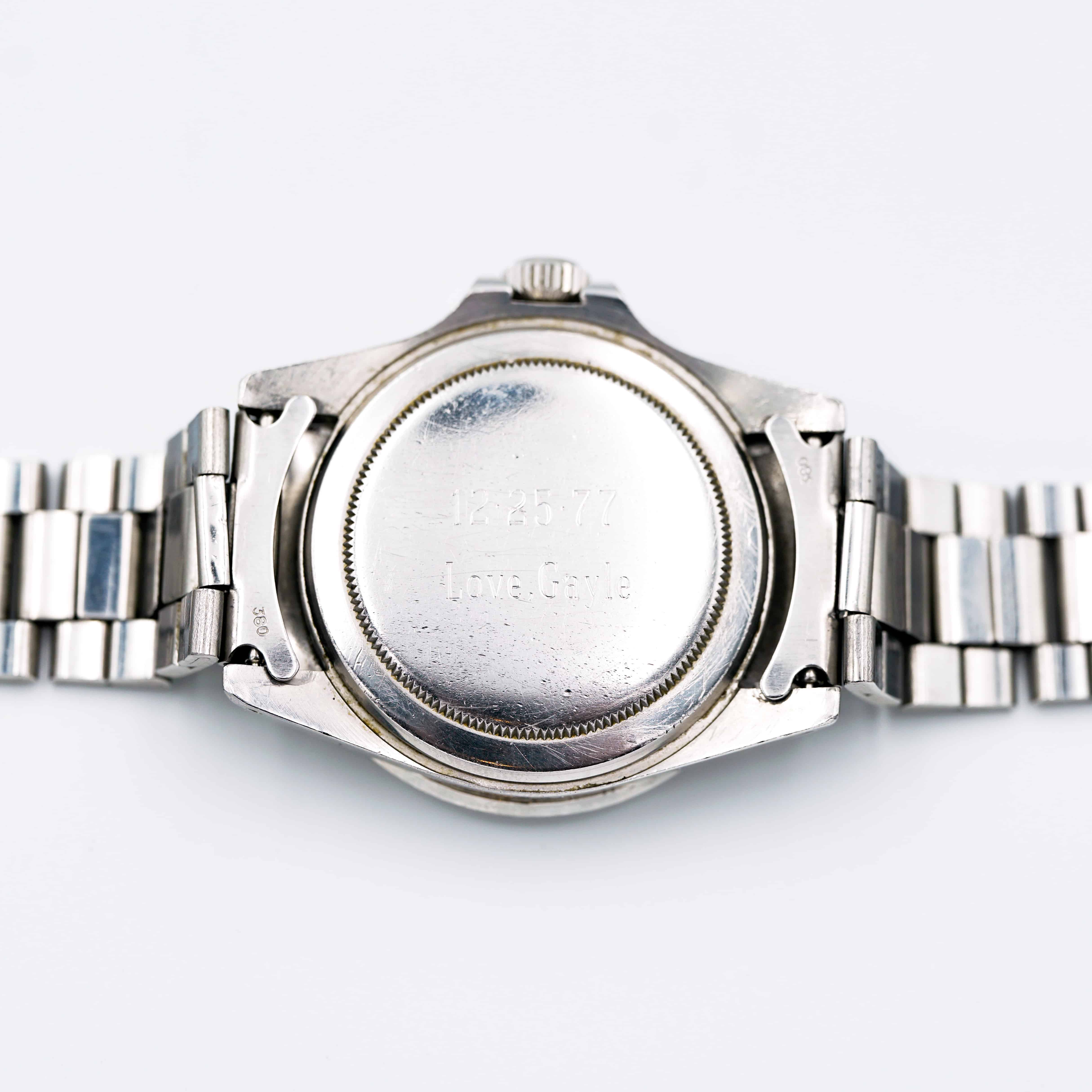 This Rolex Submariner 1680 retailed by ‘Tiffany & Co’ lets you fly under the radar, representing the epitome of understated.

The 1950s served as a game changing decade for Rolex, releasing the Explore, Submariner, GMT-Master, Day-Date, and Milgauss all in the span of three years. This group of watches relied upon one of the most remarkable developments by Rolex, the Oyster Case. Each watch was housed in roughly the same case, with only slight modifications depending on the model, as these five models propelled Rolex into the stratosphere. The brand quickly developed the reputation of success, that the longstanding aspiration of owning a Rolex meant you had made it. Despite this crowded group, one of these models stood head and shoulders above the rest: the Rolex Submariner. The models iconic design and reputation has sustained the brand’s aspirational status in the world.

This vintage Rolex Submariner is a ref. 1680 that has a wonderful trick up its sleeve. On its own, the ref. 1680 is a one of the most recognized Submariners as it marked the introduction of a date window underneath the cyclops date magnifier. Add a small stamp, just above the ‘Submariner’ signature, the watch becomes a grail. The highly coveted ‘Tiffany & Co.’ signature indicates the watch was retailed and sold by the jewelry giant and further reveals the rarity of the present watch. Perfectly representing understated excellence, this ref. 1680 is in fantastic condition as the dial’s black color remains perfect even. The original handset has developed a nice patina that is even between the three, as the lume has slightly aged on the hands as well. The original bezel remains and has only slightly faded. The case appears to have been slightly polished at one time, though the bevels remain and the original brushed finish atop the lugs remain strong. Finally, the watch retains its original bracelet with diving extension. Overall, the present watch is excellently preserved while the ‘Tiffany & Co.’ stamp adds the perfect touch of ‘look closer’ rarity that appeals so well to collectors of vintage Rolex.

Though the date is now synonymous with the Submariner, most may not be aware that it took 16 years for Rolex to finally implement a date complication with the introduction of the ref. 1680. 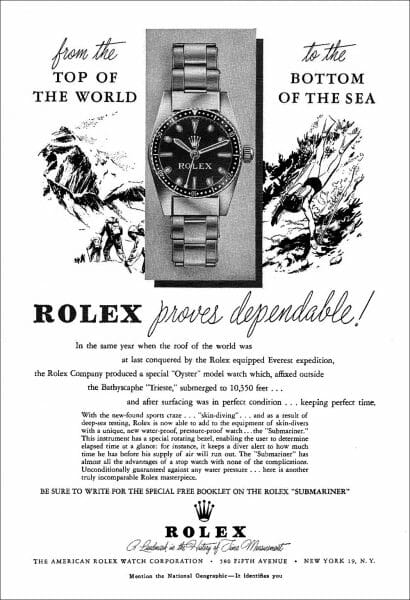 The very first Rolex Submariner was introduced in 1953 as Rolex took advantage of a great opportunity. Through its early history, the brand had continually pushed the envelope to provide high quality tools to world renowned explorers, and the early 1950s provided some fantastic opportunities for the brand to leverage. In the case of the Submariner, it was the first dive to the deepest place on Earth — the Mariana’s Trench. Don Walsh and Jean Piccard took the bathyscape Trieste to a depth of more than 11,000 meters, smashing the previous world record. Rolex, in a genius marketing move, affixed the now famous Deep Sea Special to the hull of the Trieste as the watch descended with no issues.

Alongside the mission, the Rolex Submariner was officially announced. This advertisement shows the Deep Sea Special alongside its civilian counterpart, the Submariner, as the brand stated that the “same outstanding Rolex craftsmanship that produced the “bathyscaph” watch (now in the Smithsonian Institution in Washington) is applied with equal effectiveness to the Rolex Submariner, available at Rolex jewelers everywhere.” Who wouldn’t want a watch that was designed with the same technology that travelled further into the depths than ever before?

Over the next 6 years, Rolex made small, subtle changes to the original design of the Submariner playing around with numerals, hands, font types and crown sizes. In 1959, the Submariner found a more consistent design language with the launch of the ref. 5512. The reference brought a modern movement, the caliber 1530, that would later be upgraded to the caliber 1560 that would add more KIF shock protection and a free-sprung hairspring. The ref. 5512 would finish its life with the new caliber 1570 that upped the frequency and included higher levels of finishes. Additionally, a beefier bezel that made for easier turning and crown guards that protected the vulnerable winding stem proved to be monumental changes that still define the Rolex Submariner today.

In addition to the date window, this particular reference brought many new ideas to the Submariner. The reference was the first to be produced in a precious metal, yellow gold. the ref. 1680/8 was an 18k yellow gold Submariner that was available with blue or black dials and solid gold bracelet or leather strap with gold buckle. Though widely controversial at the time, the model would finally find great success as it opened the door for luxury sports watches.

Perhaps the most important component of 1680 Submariners is the dial. Rolex would produce six distinct dials in the ref. 1680 that are commonly separated into two distinct groups. The first is the famous variant known as the ‘Red Sub.’ In this particular variant, Rolex produced six different versions. The first three placed the meters depth indication first are commonly known as the ‘Meters First’ dial. The final three variants of the the ‘Red Sub’ reversed the order, placing the ‘Feet First.’

The second group of ref. 1680 dials are known as ‘White’ dials. Within this group, there are three distinct variants. Mark I dials, the first of the reference, had the ‘L’ in Rolex centered perfectly underneath the crown. The second trait comes with the Submariner text bears the same width as the depth ratings. Mark II dials moved the “L” off-center to the left of the crown. Additionally, the Submariner text was now wider than the depth ratings. The last variant, Mark III, moved the “L” back to roughly the center of the crown.

Our Rolex Submariner ref. 1680 is a Mark I ‘White’ Dial, with the “L” centered on Rolex and the Submariner text bearing the same width as the ‘Feet First’ rating below. On our example, you’ll notice there’s a fifth line of text above Submariner. This line of text means a great deal to many collectors and is the result of a deal struck by Rolex in the late 1950s with jeweler giant Tiffany & Co. in New York. Similar to Patek Philippe’s deal, Rolex expanded their global reach as watches could be sold in Tiffany & Co. boutiques around the world. In exchange, Tiffany and Co. would be allowed to print their name on the dials of the Rolex watches they sold. Not a bad deal in our opinion..

The agreement turned out to be very lucrative for both parties as the two were engaged in business for more than 30 years. Despite the success throughout partnership, Rolex limited the number of watches delivered to Tiffany & Co. to keep the two brands distinct, resulting in very small numbers of Tiffany & Co. signed Rolexes. Today, collectors have noticed this rarity as prices for Tiffany & Co. Submariners are anywhere from 3-5x as compared to the standard ref. 1680.

For your chance at own a piece of Rolex and Tiffany & Co. history, contact us at the link above.