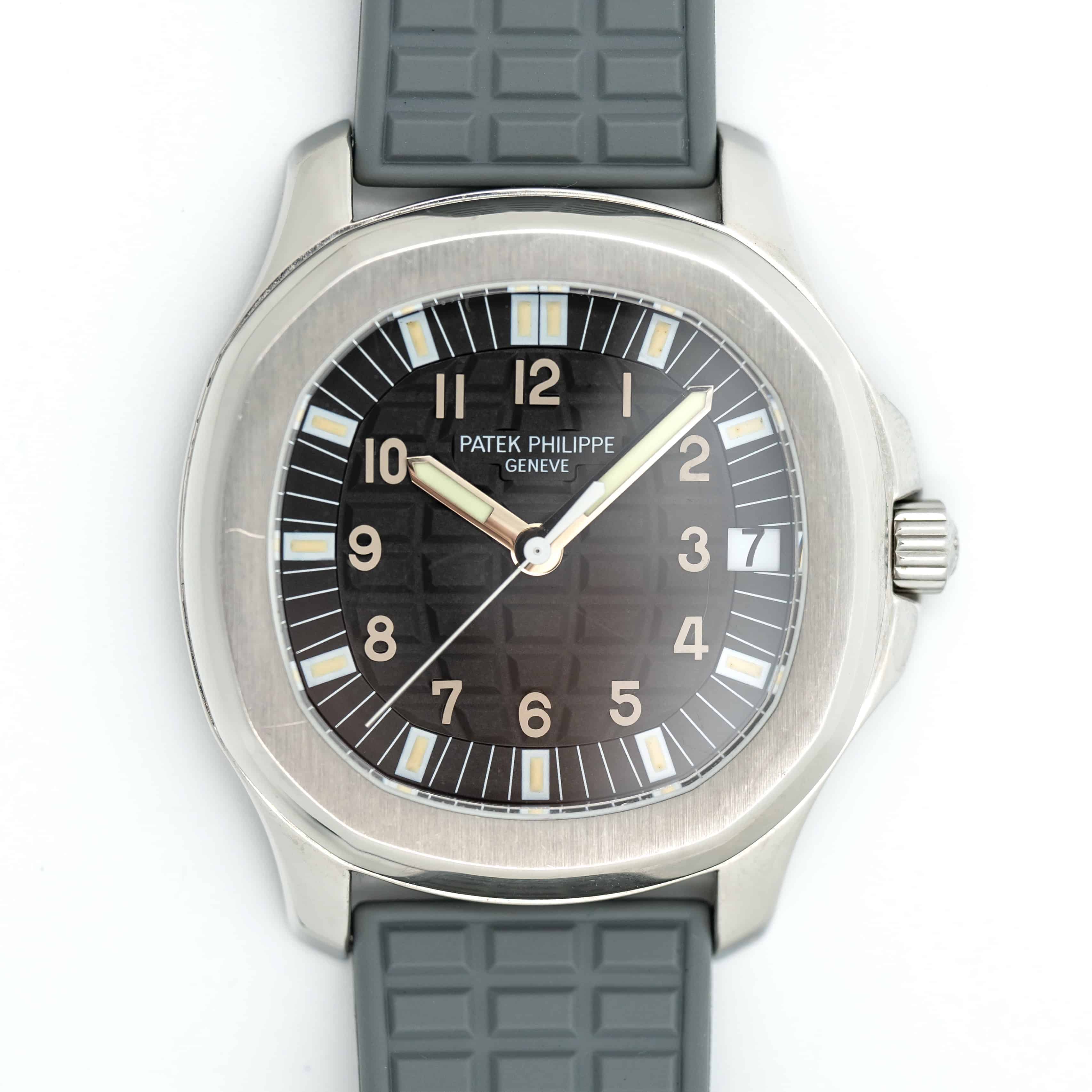 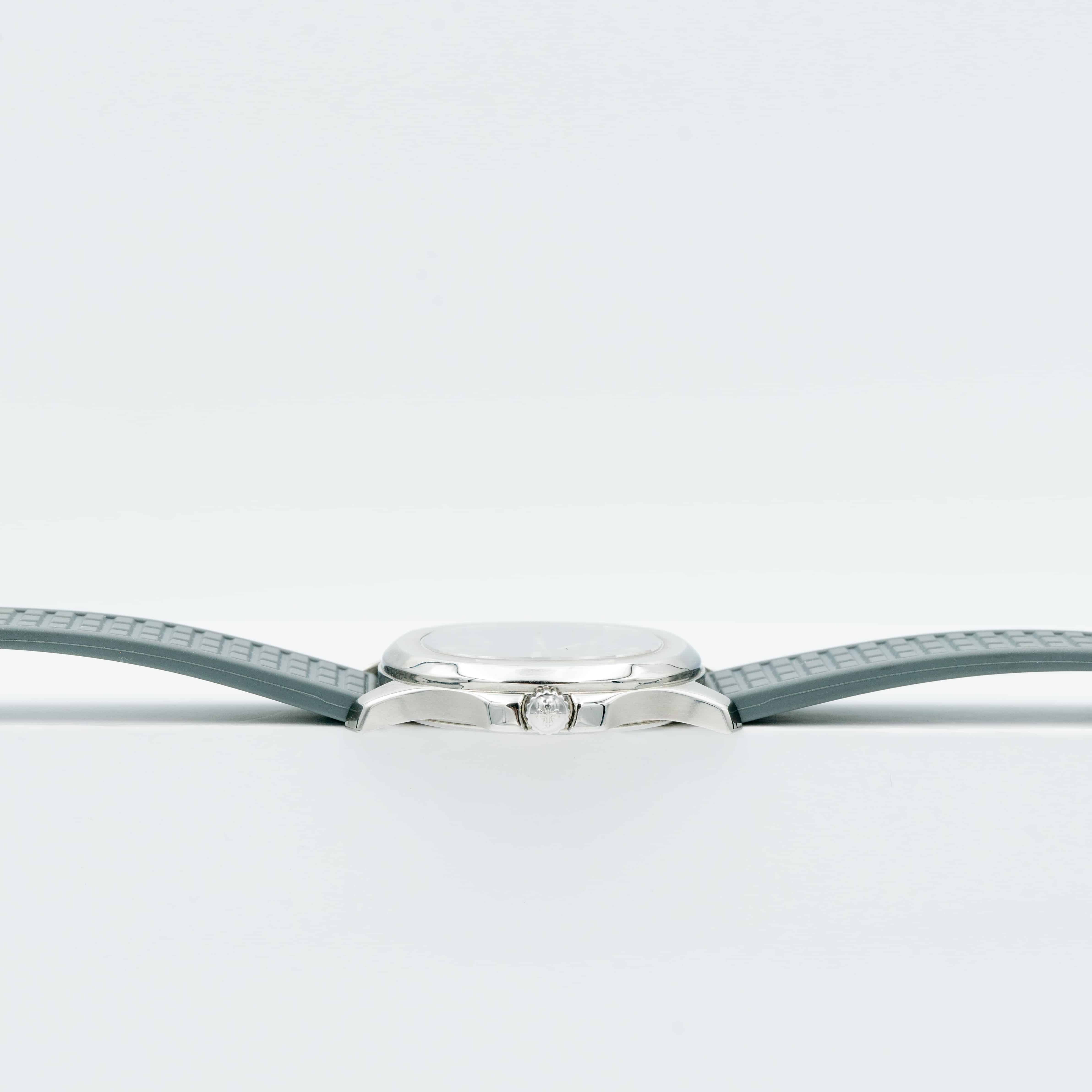 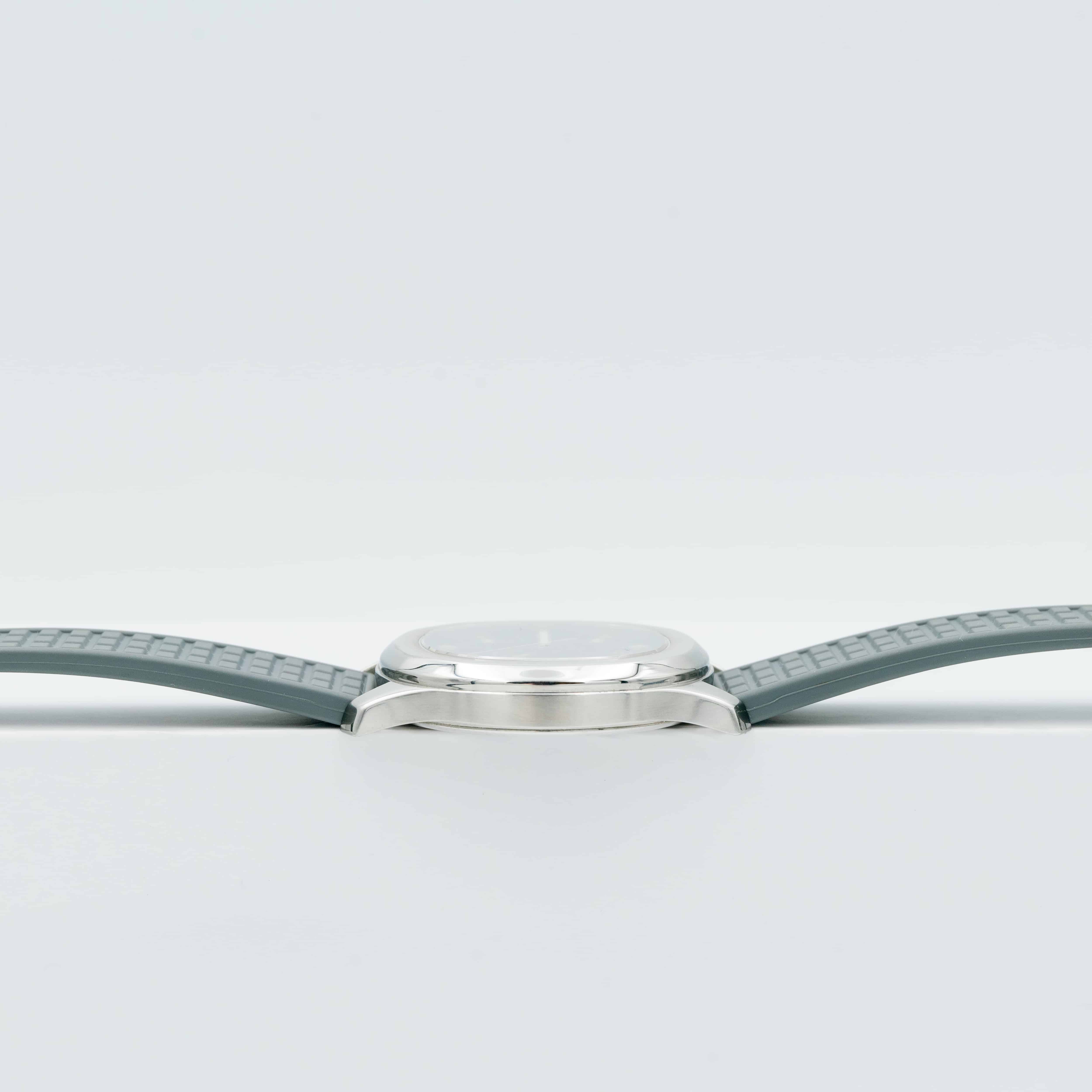 This Aquanaut lets you experience the fine watchmaking of Patek Philippe while enjoying a rugged and casual sports watch.

This Patek Phillipe ‘Jumbo’ Aquanaut ref. 5065A is a fantastic and early example of Patek Philippe’s first watch to be fitted with a rubber strap. The ref. 5065 was the successor to the limited ref. 5060A and 5060J and the ref. 5065A was the largest member of the ref. 5065 family at 38mm. Taking design cues directly from the Nautilus, the Aquanaut continued with Patek Philippe’s love for cushion shaped sports watches and wears extremely comfortably on the wrist. The Aquanaut raised the bar when it came to textured dials though, as the wonderful checkerboard dial is laid out in a worldly geometric shape as its black surface takes on light in endless ways. Finally, the rubber strap elevates the Aquanaut as it lends to a more casual wear and in turn makes you less afraid of scratching your baby! With water resistance up to 120m, you should have no fear to wear this Patek anywhere.

This particular example is likely in unpolished condition and retains a tight finish on the bezel and beveled edges of the case. The dial is in immaculate condition and bears no blemishes. The silver applied numerals are as sharp as the day they were made and the tritium lume is in tact and glows bright. Underneath the sapphire display case back, you’ll see a Patek Philippe calibre 315 SC with fantastic levels of finishing. The watch is delivered with full box and papers, even coming with an uncut black strap and its original brick bracelet.

The Patek Philippe Aquanaut was introduced in 1997 to serve as a casual wearing entryway into the seemingly daunting world of Patek. 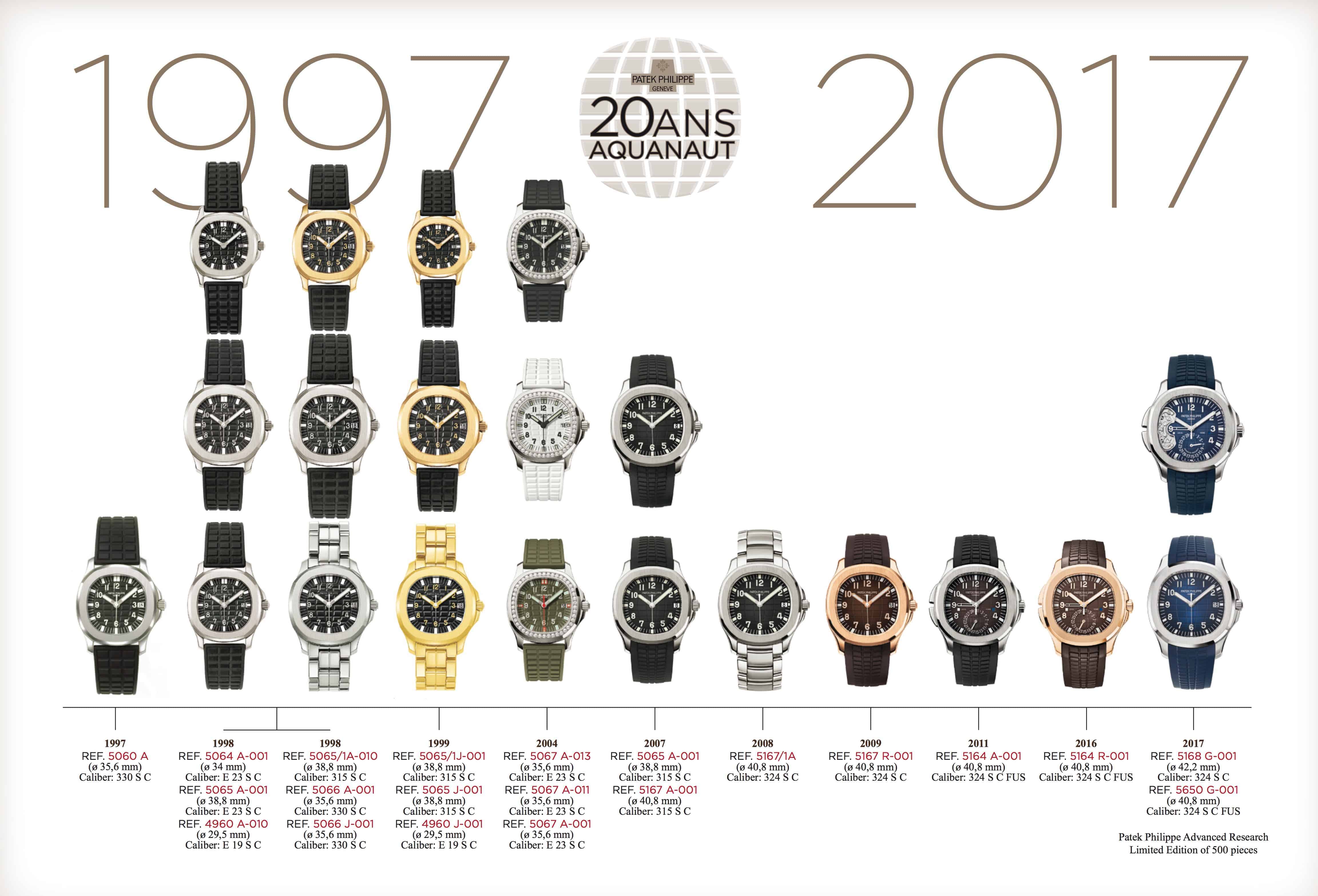 In the 1990s, Patek Philippe saw a plateau of sorts for their famed Nautilus. Though it was still a strong seller, it lost its disruptive momentum that was known to draw younger generations to the brand. Not wanting to lose the intrigue to the upcoming generation of collectors, Patek needed a fresh entry in their line of watches. A piece that captured the Nautilus’ sporty nature while capitalizing on the 1990s trends of casual wear.

Patek’s answer was masterful as it walked the fine line respecting the brand’s heritage but being its most casual watch yet. Dubbed the Aquanaut, Patek ditched the integrated bracelet and brought a first for the brand: the rubber strap. Released in 1996, the first Aquanaut, ref. 5060A, took key design elements from the Nautilus in a not-so-subtle way as it even had the exact same bezel shape.  Patek Philippe decided to strip away elements of the Nautilus and make up for it with the beautifully designed dial which had significant depth to it. From the valleys of its large geometric, guilloché pattern to the peaks of its light lume plots, the early Aquanaut dials capture light creating all different shades and shadows throughout.

While the younger crowd showed a liking to the new design, old collectors weren’t as convinced. This crowd believed they saw through Patek’s designs revealing a low-level scheme to increase profits with a ‘dumbed-down’ Nautilus. But for Patek this was a good sign as they weren’t trying to sell these watches to existing clientele. It was clear the watch was not in line with the standard Patek Philippe design cues, but that’s what the company intended for in the first place. With the smaller, sportier watch, Patek was now confident that the watch would be a fantastic entryway for new clients into the seemingly daunting world of Patek.

An interesting fact, as pointed out by Monochrome Watches here, is that Patek Philippe released an Aquanaut before they actually released an Aquanaut… The Nautilus ref. 5060S would later be shifted to ref. 5060J and is very definitely an Aquanaut with a Nautilus dial and a leather strap instead of a rubber strap. It could be seen as a test of sorts from Patek Philippe, but it seems it would have been a strange one as you wonder why they would conduct the test in yellow gold when they were trying to connect with a younger audience. As you can see in the photo, both of these watches were listed as a Nautilus and the ref. 5060S/J stopped production in 2002. 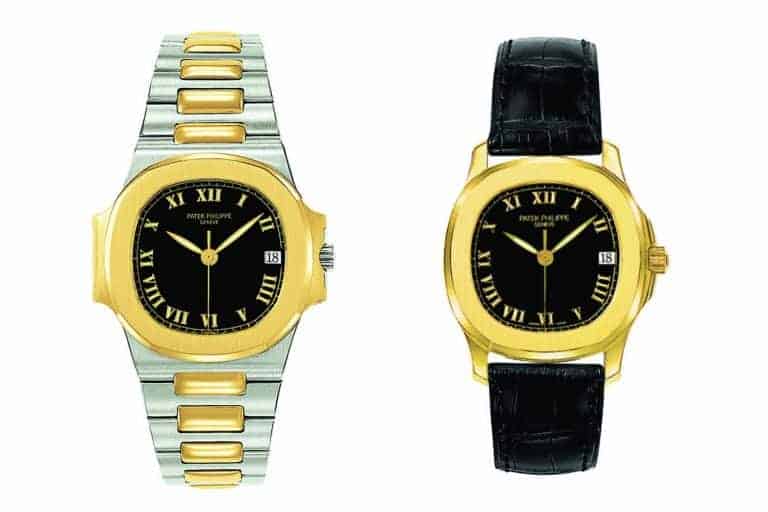 A year after the Aquanaut was officially born, Patek released the ref. 5064A-001 which was a smaller version of the Aquanaut. This reference was the first Quartz Aquanaut and shifted the date window which ultimately required Patek to remove the 3 o’clock numeral from the dial.

Just two years later, in 1998, Patek Philippe released our personal favorite, the ref. 5065A. Now known as the ‘Jumbo,’ the 38mm case offered a much more substantial wrist presence as the increased size allows you to more easily appreciate the small details. The ref. 5065A also introduced a stainless steel bracelet to the watch which made it much more versatile for those who were looking for one watch to do it all. Overall, the 38mm Aquanaut seems to maintain a wonderful balance that early Aquanauts of other sizes cannot. A year later, Patek introduced the yellow gold version in the ref. 5065J which used yellow gold hour markers as well.

For nearly ten years, the ref. 5065 seemed to be the favorite as its larger size was favored. It wasn’t until 2007 that Patek Philippe updated the Aquanaut line to the ref. 5167 that again increased its size but removed the wonderful details of the guilloché dial, opting for a flat dial that continued the geometric motif through lines instead of proper depth. Though we love the ref. 5167 and ref. 5164 Travel Time that followed soon after, we’ll always love the ref. 5065A most and if you haven’t seen one in person, we’d strongly recommend it! For a chance to own an early piece of the Aquanaut’s short history, scroll up to inquire about our fantastic example.